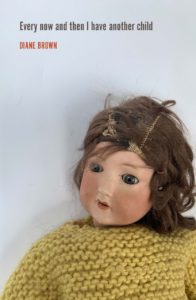 Every Now and Then I Have Another Child by Diane Brown

Every Now and Then I Have Another Child
by Diane Brown

What is real and what is imagined or dreamed? It can be difficult to tell in this at-times surreal verse narrative. Can the reader trust protagonist Joanna, a poet, novelist and creative writing teacher? Can Joanna trust herself? Is she sane? Have her imagined worlds, her dreams, her creative practice crossed over to become her reality? Is this a murder mystery or are unexplained deaths a matter of misadventure?

Readers who favour fictional prose over poetry should not be put off. These crafted short poems are as effortlessly consumed as flash, together making up a coherent short novel. Largely set in Dunedin, but also in Alexandra, Auckland, London and Alice Springs, the poems are told from the perspectives of respectable baby boomer Joanna, homeless doppelgänger Anna, a baby, a boy in a mural, and a mother. Other characters include Joanna’s two millennial sons, one a geek ‘on the spectrum’, the other a sensitive surfie; a friendly ex; a creative writing student; a couple of cops; a stepmother and an alcoholic father.

Like many of the educated political left, Joanna contemplates climate change, Australian bushfire smoke, floods, Iran, China, Trump, North Korea and the potential for World War III, riots, refugees, and the tragedies of the Grenfell tower, mosque attacks and children taken from their mothers. She has an ongoing duel with sly, street-smart, mouthy Anna who challenges Joanna’s comfortable hypocrisy.

Joanna is a window into the mind of a writer with her acerbic observations of creative writing students, younger well-published academics with their narrow foci and short histories, and the insecurity of male writers: “‘women writers are emasculating,’ a male writer once said to me. ‘I’d be hung out to dry on a day with no sun.’” She provides insights into the writing process: ‘Outside, fruitlessly waiting for words to drop like walnuts/into my lap’, describing the pattern of memoir, ‘The way your hands…start searching for trouble again,/unearthing that old thing in the back/of the wardrobe just itching for a makeover,/a whole new life.’

As she stalks Joanna at a book launch, Anna is cutting of the literati ‘masking insecurity/with false cheer, small sips of wine and nibbles/of cheese, as if they’re mice/released into a large room inhabited by cats.’ ‘You may be the writer,’ she tells Joanna, ‘but that doesn’t mean you own the plot or even the characters.’

As you’d expect of a poet, Brown has a lovely turn of phrase, from the wry understatement of ‘the cat and I are not friends’ to the confession I can personally identify with: ‘I have never possessed an inbuilt compass./Every trip a matter of faith.’ She provides clear-eyed descriptions of everyday life, shopping malls, for instance, with their ‘shops stuffed full of poorly made, absurdly/cheap and ugly clothes.//Diners are sitting in the food hall, eating unhealthy lunches,/laughing or silent and miserable with each other.’

Brown plays with the reader and her characters. Joanna advises a student that ‘all the characters you invent, or dream, are part of you,/disguised sometimes, as stalkers intent on invasion…’ Are the portrayals of Joanna and Anna an argument between two possible sides of self? Alter egos? If life had taken a different path? Is Anna the creation of Brown the author or Joanna the character? Has Joanna ‘slipped into another life, running/on a parallel track/one layer behind’?

Conflicted Joanna can’t help herself. She plays smart with detective Dave, even as she recognises this only raises suspicion. Anna has her own sad, tough wisdom: ‘keep your mouth shut/until you’re sure no one else will shut it for you.’

For all Joanna and Anna’s sharp edges, central to the story is loss and the missing: mothers, children, daughters, sisters. Joanna recognises: ‘There comes a time they must slip/from your grasp… My sons have moved away, coloured in their own edges’. The title of the book is perhaps explained in Joanna’s ‘ache/for the children I forgot to have’, the gap between parent and grown up children observed by the comment: ‘The verdict would come down hard,/as it always does if your offspring is doing the judging.’ The baby is afraid her mother will abandon her, float ‘her downstream like Moses’. ‘Like all children, I want a parent who takes time to listen/to me breathe.’

Brown’s portrayals of the sons, the ex and Joanna’s relationships with them ring true with the complexities of long troubled histories, tenderness and longing, hurt and incisive realism. Joanna, her children and Anna are haunted by questions that can never be fully answered.

This book asks wider questions. In a world of social media, trolls, conspiracy theories, fake news, fake people, bot phone calls and spam callers, what is the place of dream and the imagination, of fiction, of created characters and narratives? Perhaps it’s a question of art, of authenticity, of integrity.

Alison Wong is a poet, fiction and creative nonfiction writer based in Geelong, Australia. Her novel, As the Earth Turns Silver, won the 2010 NZ Post Book Award for Fiction. She was a poetry judge at the 2018 Ockham NZ Book Awards. Alison is currently co-editing an anthology of creative writing by new Asian NZ voices.