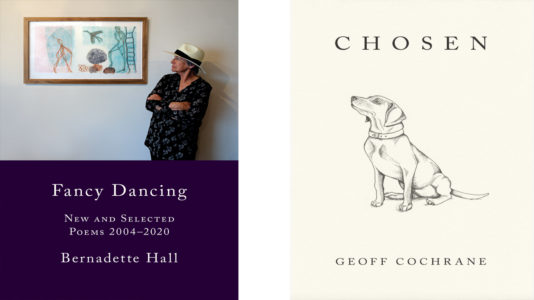 At her recent Dunedin launch for Fancy Dancing, a friend commented in his speech that there is something very Irish about Bernadette Hall’s poems. In reading this New and Selected, I tend to agree, yet it’s hard to pin down precisely the qualities of her work that make this characteristic true. It could be lyric intensity that she brings to much of her work, the strength of which will make even the most complacent reader skip a beat. It could be the humour and humility of her work; Hall is never afraid to show how much she likes to laugh, both with good company and at herself. It could also be the importance of place (Ireland included) to many of these poems – we go from Amberley Beach to Antarctica, from Dunedin where the poet grew up, to Rathcoola in Ireland itself, where Hall held a now-defunct residency back in 2007.

Potential ‘Irishness’ aside, there are dexterities displayed here for the simple reason that these poems – being a ‘new and selected’ – are the crème de la crème of Hall’s oeuvre. One need not go searching for the strong pieces: these poems have been distilled from an already-refined batch. In this discerning curation, readers will start to see patterns, obsessions, tics, if you like. One particular characteristic I noticed as I worked my way through these was the use of that now-tired device, “it’s like…” To my mind, Hall is the great kuia of the New Zealand simile, even when attaching a locale runs the risk of being too parochial. It might be more accurate to say that, as far as the use of the simile in New Zealand literature goes, Hall has prowess to boot, and everything that comes after her is in some part a homage to this. Hers are masterful, arresting, and unsurpassed: ‘the pine forest looms like a collapsing / building’; ‘they stand there / braced like a locked gate’; ‘the rain is like mice scrabbling in the ceiling’; ‘It’s like walking into a room that’s full / of McCahons, you know, the way the air changes…’; ‘the colour seems to hang like smoke’; and, my favourite of them all, ‘Waves bunch up / like Christmas.’ I could go on, but you get the idea.

And this is not to say that she has no other tricks up her sleeve – quite the opposite. Rather, her similes fall in step with her playfulness, her tenderness, and, in the final sonnet sequence (that constitutes a good part of the new in the ‘new and selected’), her excavation of a subconscious or memory-laden mind. In this final ‘chapter,’ if you like, Hall moves into something of a Proustian remembrance; the poet digs around in both her mind and her tool-belt to find new things to say and new ways to say them. She takes small moments as if they are photo negatives and blows them up and examines the contents: ‘Now it’s time to expand the narrative. So come / with me into a dimly lit corridor in the Mayflower / Student Hostel beside the Mississippi River / in Iowa.’ These pieces are populated with various selves and lovers and confidantes, and the use of the second person often pushes the reader into a place of intimacy with the poet herself: ‘I remember you in your scarlet tights’; ‘the way I had that other / question for you as I buttoned up your coat.’

There is a comment from Hall on the back of the book, where she says that Fancy Dancing is ‘as close as I’ll ever get to writing an autobiography. If this is the case, there is certainly a lot of Hall in here to deduce a life story. But the beauty (a word that comes up often in Fancy Dancing) of this collection is that there are lots of lives and lots of stories, and put together they amount to much more than the sum of their parts, to use that tired cliché. Or, to pay homage to the queen herself, reading Fancy Dancing is like being able to choose a single malt whiskey over a blend, and then being offered seconds.

Another release in the Cochrane annals, Chosen, follows quickly behind his last collection, The Black and the White (2019). Cochrane announced at his recent book launch at Unity Books in Wellington that Chosen was his last book of poems; he’s throwing in the towel, he suggests. But then, donning a pair of worn trackpants, he also announced at the same book launch that he promised his sister he would never wear said trackies in public. I suspect he’s about as likely to write at least another book of poems as he is to make sartorial promises to his sister. This collection, like its antecedent, is concerned with aging and death, and it strikes me that as long as Cochrane stays alive (against his best wishes at times, it seems), he will continue to think about these things. After all, poetry is in part, what keeps him alive, even when he appears preoccupied with ‘the end’: ‘the ping of my own existence,/ping of my own existence,/ping of my own continuing existence’ (from ‘Sundries’).

While slim and a little scant, Chosen is the latest in the poet’s urbane wanderings. Cochrane takes us around Wellington – up Marion Street, to Victoria Street Café, out to Island Bay – and through his daily meanderings – a trip to New World, the doctor’s surgery, the breakfast table: ‘Insulin and Weet-Bix for Breakfast. Three Weet-Bix with / a teaspoon of sugar. And I sit here perking like an old / Cona coffee percolator’ (from ‘Shoot’).

Like many of his peripatetic predecessors who wander alone but take comfort from the literary conversation that continues across the generations, the poet is chatting with some of his favourite chums: Donald Barthelme, Nicolson Baker, George Saunders, John Berger and John Updike, to name a few, are all in there. (The only women to get a mention are a nameless dog owner, Wendy Cope and ‘Ashleigh,’ to whom Cochrane asks forgiveness: ‘I open my mouth and dreadful things / totter out of it.’) And yet, the other literary great that seems to haunt these poems (and much of Cochrane’s work perhaps) but doesn’t get a mention here, Frank O’Hara looms large. As the poet himself admits: ‘I like what’s slim./ I like what’s portable./ I look to what I’ve read before with pleasure’ (from ‘Summer’), conjuring up the New York School with his clipped, diaristic lyrics.

Chosen is, like O’Hara’s Lunch Poems or Barthelme’s Paradise, as Cochrane himself says (of the latter), ‘a zestful wee caprice as light as cake.’ It may not satisfy the probing reader, but there’s something very comforting in knowing that we have our very own O’Hara, drinking coffee and smoking a cigarette outside Victoria Street Café, or catching the number 2 bus home to Miramar. 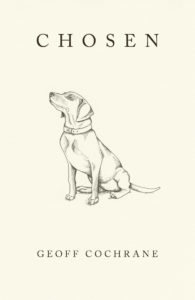 Lynley Edmeades is the author of As the Verb Tenses (OUP, 2016) and Listening In (OUP, 2019), which were both longlisted for the Ockham New Zealand Poetry Prize. In 2018 she was the Ursula Bethell Writer in Residence at the University of Canterbury. She has a PhD in English and lectures at the University of Otago.