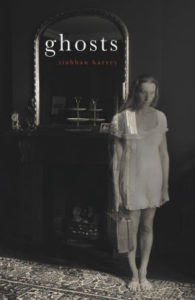 Siobhan Harvey is one of the tireless midwives of our local poetry scene. For years, she has reviewed and promoted poetry books, compiled anthologies, lectured in creative writing, organised poetry readings. She has taught and mentored poets such as Kirsten Warner, Elizabeth Welsh, Michael Giacan, and Zachary Hikoi Robertson. Every few years she manages to find time to knock out a new book of powerful and humane poems. Her 2014 collection Cloudboy won the coveted Kathleen Grattan prize, and was also published by Otago University Press. In his judge’s report for the 2013 Kathleen Grattan Poetry Award, Jeffrey Paparoa Holman described Harvey’s poetic ability as, ‘. . .demonstration of another world in language that can take the reader inside with the subject, to feel a flawed, common humanity.’

Her latest collection Ghosts, the press release and book’s blurb informs us, deals with, ‘migration, outcasts, the search for home, and the ghosts we live with, including the ones who occupy our memories, ancestries and stories.’ That’s a lofty and heavy mantle to carry, given that since poetry’s first utterance these have been its implicit drivers. Across four sections bookended by an Epilogue, Prologue, and Afterword in the form of an essay, Harvey lyrically interrogates the personal, social and global strata for manes, visitants, poltergeists. Here’s the opening two-and-a-half couplets of the titular poem:

All the buildings that never were.
All the novels unwritten. All the dead

Harvey is a poet who has always written from a place of compassion, of which I find the scope and depth humbling. Ambitiously, she has set out to write a fugue to what is lost and irretrievable. What she has shored is a broken epic of minor and major, personal and collective griefs. We encounter the author’s ancestral ghosts in Britain. Ghosts of families whose Glen Innes statehouse homes were sold off, trucked away, and steamrolled by the Key government. Ghosts on Manus Island. There are ghost trysts with a first love. Ghost words. Ghost writers, ghost poems. Everywhere in this book, ghosts are pointed to. We are told of them. They are talked about, they are described. But rarely do we get close enough to see or meet them. Such is the nature of ghosts, I guess. They are nebulous and fickle in the ways they choose to haunt us. Harvey, like most of us poets, is haunted by many things:

The evicted; the exiled; the gone:
the land remains alive with them,
like shadows, shudders or warmth
of the sun. When light bulbs flicker.
When actors, captive to drama, disappear.
So, an invisible engine, another tremor
rolls through our homes. And we,
the enduring, stand in doorways searching
for signs of the departed and lost
in broken earth and sky faint with starlight.

(from ‘The Ghosts of Aranui’)

In a pre-release interview on the Otago University Press website, Harvey says, ‘Ghosts is a literary provocation, asking readers and wider society to realise and korero with the lost souls we all carry within us, those present in our whakapapa, memories, whānau and pasts, and how, in doing so, we are all therefore ghosts also.’ Harvey displays a fine lyric sensibility across this collection. She sets down some astonishingly beautiful and timeless lines. Her gift is for the exalted phrase, where she pushes language into the realm of the ecstatic, even when what the language is binding itself to is often trauma and despair. The strongest poems in this collection are where Harvey bravely directs her focus and lyric power onto herself, her family members – particularly when she is writing about the strained relationship she has with her mother in ‘My Mother is a Ghost Living In My Memory’:

The other life I might have known
with her is filament burned
into my mind. A movie
never released; a book
unpublished: these I inherit
as she ghosts me. The forgeries
and false antiques of reconciliation,
long-lost phone calls stirring
in the still of night, I learn
to surrender everything in time.

All poems (yes, even the happy ones) are arguably elegiac by nature, in that the experience, emotion or thought that is the poem’s impelling force can never again be realised. The poem becomes its own memorial, even as it is being written. Paradoxically, the writing of a poem cannot happen without an invocation. And that’s sort of the gist of what Harvey is up to here. Ghosts is a moving, austerely beautiful series of such invocations and memorials. But, like any book, it is not without its flaws.

At times Ghosts began to feel like a creative writing thesis. That is, a manuscript where one too many poems began to feel like writing exercises, maquettes or studies – warm-ups for the main event of the true poem’s occasion. And there are many, many true poems in this book. Harvey is to be commended for her experimentation, for employing such a diverse range of verse and poetic forms. She is able to write to a beat and metric, and shows a gift for appropriating non-literary forms too. Her ‘Serving Notice upon the Prime Minister’ – one of the most successful experiments in the collection – utilises the form of an eviction notice to be served on the Beehive. However, I did find myself questioning the necessity of the erasure poem made from Key’s 2015 announcement to cull and sell-off 800 state homes. Rarely do erasure poems work in isolation. And it is unlikely this poem will have any meaning to a reader who has no familiarity with the text it is composed from. There are also too many footnotes and quotations cluttering up the white pages of this book, taking focus away from the beautiful architecture of the poems themselves. It’s also somewhat condescending to title an erasure poem, ‘Erasure’ or to subtitle a group of numbered poems ‘a sequence.’ Even the most casual poetry reader can work this stuff out for themselves.

One of the weird little mantras they hammer into you on any writing course is, ‘Show, don’t tell.’ This is something of an oxymoron: you simply cannot show without telling. But, of course,  this pertains to the use of concrete and precise imagery, as opposed to the general and abstract. I mentioned earlier at times feeling as if we do not get close enough to these ghosts. They are often broadly described, leaving the reader with little or no sense of their physical or spectral identities. This is small stuff. By no means does it detract from the beauty and power of this fearless performance.

Michael Steven is an Auckland poet.