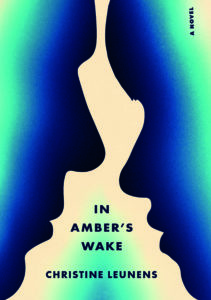 In Amber’s Wake by Christine Leunens

In Amber’s Wake
by Christine Leunens

Christine Leunens has been living in Nelson since 2006, after an international career as a model and some success as a screenwriter. In Amber’s Wake is her fourth novel; the most famous being Caging Skies, adapted by Taika Waititi for his award-winning film Jojo Rabbit.

This time, Leunens turns her eye on her adopted home, more particularly Auckland, stamping ground of the central protagonist, Ethan Grieg. The first-person narration begins in 1979 at the Nambassa festival, runs until 1991, and then casts off into the future. In a couple of paragraphs Leunens swiftly evokes Nambassa in all its nudie hippy patchouli dope-smoking colour, setting the scene for the first meeting of Ethan and Amber, who will become his great love. They are the same age, almost eighteen. Both are from relatively conservative families, and both are just setting out on adult life.

The novel would end not long after if the course of love ran smooth, but it never does, and Ethan and Amber have some fearsome obstacles. Leunens keeps the pace rolling at a swift clip as Ethan studies film at A.T.I (which she laboriously only ever refers to as Auckland Technical Institute), does a little OE, puts up with his mother on return, lives in scungy flats and pines for Amber, who gets married, but not to him. The limitations of the first-person perspective mean that the reader can only know what he knows about her life, from what she tells him and what he observes. Late in the book Ethan remarks that he is ‘the one who is as much part of the picture but who is somehow always left out of it.’ Leunens wants us to believe that Ethan loves Amber forever and above all others, which a cynic might think is only ever a subject for a woman novelist.

The era is carefully evoked. During Ethan and Amber’s early phone calls in 1979,his little sister picks up the extension and listens in. He remarks that it’s ‘like Watergate’. Santa Claus is still in his finger-crooking glory on the front of Farmers in Hobson Street; in September 1981 the Tour is dividing us more than any mandate, and the U.S. submarine Phoenix is made unwelcome in 1983. In 1987, when the Rainbow Warrior is towed up to Matauri Bay, Leunens’ description of the wounded ship is vivid and emotionally affecting:

. . .  [A]nyone could tell the ship was in a state beyond hope. Too much of her hull was submerged below the waterline, only a small sample of the rainbow painted on the bow still visible, the white dove just making it out of the water like a flying fish. She looked ravaged and old, the wood on the front deck looked rotten, and the holes at the bow were weeping with rust.

As the novel progresses, Ethan’s voice matures. Early on, there is a penchant for exclamation marks and capitals. When Amber accompanies him to Eden Park, he observes: ‘…she went absolutely APE! The moment we got outside the grounds she started siding with the most hardcore protesters, freely throwing ROCKS and FUCK YOUs at the POLICE!’

Leunens has listened to the way we speak, or some of us. Ethan remarks, ‘Man, did she know how to make me feel bad’ and … ‘boy was she quick to find just the right thingamajiggy to fit into another thingamajiggy’

Ten years older, the sadder, wiser man expresses himself more moderately, reflecting on his past from the distance of Antarctica while he makes a documentary.

The intended readership for the novel is blurred. It would appeal to young adult readers. Sexual content is never explicit. Ethan remembers: ‘…we stared into each other’s eyes for so long and then, still staring like that, came together… It was intense love, right from our hearts. Afterwards she clung to me like she never wanted to let go.’ Adult readers might struggle to take this seriously.

Likely, In Amber’s Wake would make good television. It’s episodic, the characters are kindly if sometimes misled, and the complex plot hinges on tangled relationships, often with a slightly old-fashioned desire to preserve family reputations and standing in the community.  A golden light of nostalgia is cast over all.