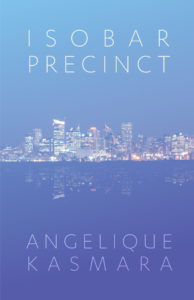 They’re interrupted by what seems to be a sudden, violent skirmish between two men that produces ‘bright curtains of [blood], spraying out in a fan, saturating the thicket.’ When our three compose themselves and look, incredulously, at the scene, they see no blood, no disturbed vegetation, and no sign of the two combatants. The only evidence is some phone footage, but the police can’t act without any physical evidence at the scene.

This unsettling, fantastical incident is just one of the puzzles Lestari is trying to unpick: there’s the recent spate of burglaries at their parlour, the disturbing deaths among the homeless and street workers of the neighbourhood, and rumours about a powerful new street drug with unusual side effects. She must also deal with unsettled aspects of her own life, from the disappearance of her father when she was a teenager to her illicit relationship with a married detective.

The murder in the cemetery launches Lestari on a search to make sense of it all, and suggests the speculative edge to the novel’s visceral realism. An offhand, easily missed mention of MKUltra — a covert CIA project that ran from 1954 to 1975, in which unwitting subjects were given experimental drugs to alter their behaviour — is a clue to a part of the background of the story, but it gives no hint of the subtle and surprising way that story line unfolds. To borrow a term once used to describe Beethoven’s quartets, there’s a controlled unpredictability to it all that makes Isobar Precinct a compelling joy to read.

Summarising the plot gives no sense of the novel’s many pleasures: the turns of phrase, the sharp characterisations and the uncanny way Kasmara renders some of the more magical moments — including time travel — in a way that renders it plausible and clear.

The headset is soothing in its ordinariness. As soon as it’s clamped over my ears, colour seeps from the room. Ratu appears to have left. At least, I can’t see him anymore when I turn my head.

And my heart hits my ribs. It’s the entire room which has left. I’m panicking now, flailing into this vast volume of nothing. I start screaming as a sudden rush of light hits my eyes, slamming them shut. After a moment, I allow myself a peek. Balls of swirling rainbows against deep dark heavens are suspended before me. What I see now stops my breath.

Trapped within each ball of light is a transparent version of myself, bodies breaking apart, re-forming. Now they’re blinking on and off like faulty light bulbs. And the sound. A buzzing, low and easy to ignore at first, now cranking it up to high-pitched and frantic.

Primarily set in 2015, with flashbacks to key points in Lestari’s life, back to the year of her father’s disappearance, Isobar Precinct is grounded in Karangahape Road — Auckland’s most colourful thoroughfare. Kasmara is particularly adept at capturing the essence of a place. This is K Road as Lestari is walking to work:

I’m waiting at the intersection from Grafton Bridge to Karangahape Road, plugged into Johnny Cash to drown yesterday out. There’s a fairy princess in a cloud of pink upchucking into a bin next to me. The pedestrian light flashes green and we cross, pink-cloud billowing past me to catch up with her friends dawdling on the footpath, guzzling bubbles out of plastic tumblers. I’m out of sync with the rest of them – Karangahape Road’s just shutting its eyes now. Drag queens, drunks, art students are all stumbling home, only a handful caught by the red-streaked sunrise, which licks us awake again for another burst at immortality.

And here is K Road as Lestari is leaving work:

The street’s switching to night mode, a DJ at Verona bleeding trip hop, artists and opportunists guzzling Pinot Gris on the doorsteps of a gallery, the slow trickle of human flotsam down the steps of St Kevin’s to the Wine Cellar, the hiss and thump of short-order food being served up – pizza, pad thai, char kway teow, lamb kebabs, inhaled at flimsy outside tables, petrol fume spritzer on the house.

Kasmara is not only deftly attuned to the sights, sounds and spirit of the urban centre; here, she describes the road where her mum lives in West Auckland:

Tough and determined, Lestari is the heart and soul of the novel, as well as its engine. Kasmara has created a narrative voice that is cool, assured and always pitch perfect. Her instincts for pacing are perfect, too. There’s never a data dump of information. Instead, we learn about characters the way we do in real life, slowly, with bits revealed over time, with each new fact rendering that person — and the story — more complex.

The arc of the story begins in Symonds Street Cemetery, a nearly forgotten place of remembrance, and finishes at a frothy fountain in Albert Park, bubbling with life; ultimately, Isobar Precinct is a story of optimism. As Lestari says, ‘Truth is, we’re programmed to keep following whatever thing it is that brings us a sliver of hope.’

Isobar Precinct reads nothing like a debut novel. It’s true that it arrives with an impressive pedigree: an early draft was awarded the University of Auckland’s Wallace Prize in 2016, and it was one of three finalists for the 2019 Michael Gifkins Award. But those accolades, and all the positive reviews Isobar Precinct will undoubtedly receive, cannot fully prepare readers for the virtues abundantly present in this sparkling, stylish novel.

Tom Moody is an American writer and editor; he lives in Auckland.