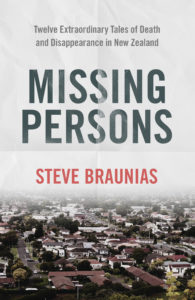 This compilation of 12 cases, most of which first appeared in the New Zealand Herald, is a follow-up of sorts to the author’s 2015 The Scene of the Crime. The book developed during a time when Braunias considered himself ‘missing.’

‘The usual failings;’ he writes, ‘plus old age, which for so long had felt like a rumour, was busy furnishing my life with intimations of mortality.’ He ‘was a lost soul’ who ‘took a special interest in reporting’ the stories of Socksay Chansy, Nigel Peterson, and Murray Mason. Braunias says ‘I almost felt envious. They had managed to disappear.’

He does understand that it’s not all about him. On meeting Nigel Peterson’s parents, ‘I had to fight very, very hard not to intrude on their grief and burst into tears. They didn’t need that. They lived with their loss and bewilderment. I was in town for the morning.’

Snippets from their recollections are devastating in the detail. ‘“He’d watch animal programmes for hours,” said Chris. “The funny thing is I’ve still got — and I can’t delete them — all the dinosaur documentaries I recorded for him on SKY.”’

The chapter on Socksay Chansy gently stitches together the pieces of the person who grew up in Mt Wellington, whose life once held much promise — he had a video-editing business in Berlin; he had many people who loved him — but had a troubled side. Tiny moment on top of tiny moment slowly pulls you in and leaves you bereft. ‘When we’d first walked inside the emplacement, and we were looking around that small, damp tomb, Neil pointed to a coin on the floor. “I think that was Socksay’s,” he said. We stared at it. It was a 20-cent piece.’

Then there’s Murray Mason, a hard drinking ex-Herald journalist who died after a lonely fall down a stream in the Auckland Domain. His friends remember him as a ‘fantastic joker.’ But when Braunias contacts Mason’s daughter, Rachel Wise, she reveals another side, ‘an unrelenting story of trauma and unhappiness and grief.’ Mason was nasty in the worst of ways, his reign of terror only ending when he left the family. It’s a superbly crafted piece on the unravelling of a life.

Missing Persons might well be peak Braunias, although I’m still rather taken by his 2007 memoir, How to Watch a Bird. And the magpie ways in which he collects stories echo the bird watcher within. He makes no secret of the fact that he’s drawn to boring houses in boring suburbs (‘The murder capital of New Zealand is the suburbs’), and thus can often be found in one, excavating the grimmest of details over a cuppa and a slice. After once remarking that bookshelves were ‘an uncommon sight’ in Te Atatū (Braunias lives in Te Atatū) he was lobbed with photos of bookshelves sent by annoyed locals. (I grew up there myself; our bookshelf boasted the complete World Encyclopaedia set and Reader’s Digest’s top mysteries). It’s also the suburb where Anna Browne murdered Carly Stewart. Where Ron Van der Plaat sexually abused his daughter Tanjas for many years. And where 69-year-old Cunxiu Tian was sexually violated and murdered by Jaden Stroobant in a horrific attack.

Men feature heavily in the compilation. In several of these cases, it’s because the women we could have been listening to are dead, at the hands of a man. Simonne Butler is one exception. She says she can ‘play the attack like a movie’, and proceeds to do just that; an unflinching account of the day her ex-boyfriend Antonie Dixon nearly murdered her. The legacy of the attack is something she has to deal with every morning: ‘those hands, that claw up in winter, and she has to soak them in a basin of hot water when she gets out of bed in the morning. After that, they’re good to go.’

The inclusion of entrepreneur Kim Dotcom comes as hilarious light relief (as does Colin Craig, whose chapter is called ‘Half the man he used to be’). Dotcom is a prepper, ‘preparing for end days’ with a somewhat frugal outlook. When asked about a steady water supply, he replies: “These technologies are quite advanced. They basically turn your own pooh and your own pee back into drinking water.” Braunias describes him as “a man with two visions. One, the fear of rotting in jail, a creature in captivity; two, the idea of hiding in an underground bunker.”

The book begins and ends with coverage of the trial of Grace Millane’s killer. It’s harrowing on a few levels, delving as it does into bleak detail of what the courtroom demands of its witnesses, and of Grace herself, in order to conduct a fair trial. And of course, reading about Jesse Kempson’s actions, ‘rightly described as depraved’ — from Justice Simon Moore’s summary. For some part of the narrative, there’s no moving past Kempson until, finally, we’re done.

Braunias particularly excels at the exit, closing each chapter with sharp, spare and devastating prose. The final lines of Missing Persons are a beautifully wrought example, when all that’s left is an emptying courtroom, with its “old familiar silence” and a framed photograph of Grace Millane.

Angelique Kasmara is a writer, editor, translator and reviewer from Auckland. Her novel  Isobar Precinct will be published in August.