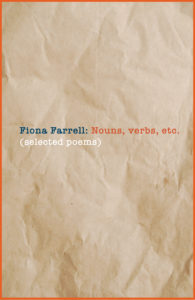 Fiona Farrell needs no introduction to readers of New Zealand fiction. Her novels have been widely appreciated, from her first, The Skinny Louie Book (1992), through to her most recent, Decline and Fall on Savage Street (2017).  This latter novel was preceded by a non-fiction companion book The Villa at the Edge of the Empire (2015). Both of these works focused on Christchurch, the city in which Farrell was resident at the time. Intelligent, furious, affectionate and historically sound, these works should be regarded as nothing less than taonga.

Farrell is perhaps less well known as a poet, despite having published four volumes. Nouns, verbs, etc. (selected poems) samples each of the four and adds into the mix some uncollected and/or previously unpublished verses. The book is a welcome addition to her substantial publishing record and cleverly structured, beginning with poems from the first collection, Cutting Out (1987) and moving through subsequent collections, The Inhabited Initial (1999), The Pop-Up Book of Invasions (2007), to The Broken Book (2011). Interspersed between each selection are uncollected verses.

‘It feels like a time for poetry’ the preface concludes, an opinion only supported by the renaissance of the genre. All around our uncertain world poets such as Kate Tempest are enjoying almost rock-star status. Earlier in her preface, Farrell remarks how writing poetry may comfort and inform the poet herself: ‘…the simple act of choosing words can give the illusion, however temporary, of control when emotion threatens to overwhelm.’ There is subsequent clarity and warmth in many of the poems, even those that have difficult and disturbing subjects. Abstract poems are few and consciously abstract; the majority throw the reader into vividly realized scenes.

I am a long-time fan of Farrell’s. As I read through this volume, I was reminded of much of her previous work. The preface brought to mind her 2004 Book Book, a non-fiction examination of her reading life, beginning with her childhood. Here she reveals her earliest poem ever, talks of childhood reading, how she was influenced by bible readings from church on Sundays and the metaphysical poets she studied for University Entrance. The eel in one of the uncollected poems had swum there from the pages of Decline and Fall on Savage Street.

Much of the chosen work from the first volume, Cutting Out, is youthful and some perhaps did not quite deserve a second outing. Even so, Farrell’s fascination with words, her adept handling of them, is already apparent. The poem ‘Spring’ gives both metaphorically and rhythmically the bright pop of the new season. She shows us:

‘That duck racing for the reeds

on wheeled feet and after her a

hose inches of it zoom into the

reeds and all that rough spring

I must have heard her read from this volume sometime late last century because there are lines that I remember, particularly from the poem ‘Seven Wishes’: ‘that you should fit inside me neat as the stuffing in an olive’ and ‘that I should touch your skin through the hole in your tee shirt.’ Here is the physicality and state of longing, memorably expressed. At this stage of her life, as a young wife, the more personal poems concern themselves with birth, miscarriage, sex and love both unrequited and returned.

Had the decision not been made, either by poet or publisher, to structure the book chronologically, it may just have easily been built by subject or style. Throughout there are poems from all decades that are reminiscent of fairy tales. Perhaps assisted by her recent Irish heritage, Farrell is very good at constructing vivid, witty tales in verse. ‘The Castle’, one of the uncollected poems, is the story of three competing suitors. The reader could believe it to be set in Europe but for the kanuka, which the winning lover brings to keep his lady warm. Another poem gives us the woodcutter again, each prose verse beginning with the word ‘Once’ and introducing us in turn to a bird, a worm, the woodcutter and an old woman. In ‘The old woman’s story’ the story is a living thing, animated, clever and amusing like a companion, pet or child. There is theft and loss, but the story grows again and ends happily, as all good fairy tales should.

History, whether in the use of old forms of storytelling or as subject and inspiration, is often present. The Cutting Out section includes some poems from Farrell’s popular and much performed girls’ play ‘Passengers’, which depicts the lives of some twenty young nineteenth century female immigrants to New Zealand. The Pop-up Book of Invasions wrestles with the colonialisation not only of New Zealand but also of Ireland some centuries before. The poem ‘Ballad’ is a brave attempt to address the age-old conundrum of colonial metamorphosis: Hero, Bard and Beauty are not bad people on the ship out, but they become so – later in the poem they are Oppressor, Judge and Thief.

The Inhabited Initial, much of it written during the Gulf War, expresses not only deep fascination with the evolution of language but also fury with that geopolitical mess. The titular first series are dreamlike language poems. As Farrell explains in her notes, inhabited initials are the ornamental initial letters in illuminated manuscripts that contain images of animals or people. Here, Farrell inhabits the initials without illustration, instead using images constructed of words. For example ‘Cc’ is the camel, who appears again later in the poem

‘…from another direction, dust

fluff at each footfall, and

on to dots and silence…’

This is words and punctuation made animate.

The most powerful poem cycle in the collection comes from The Inhabited Initial. ‘Words, war and water’, is alive with rage and empathy. It begins with the translation of an ancient Hittite tablet in the Middle East – Farrell places the tablet in Iraq. The fifth poem ‘Hamed Ameri’s skull won’t stop growing’ is concerned with the birth of children deformed from depleted radiation. It makes use of open, empty parentheses on the page and the recurring question, ‘Can you hear it?’

‘This is the sound a child makes

who is born with no head. This

is the sound a woman makes who

labours to bear a child without

fingers, a child whose head

Gentle, simple motifs of dragonflies, bread and water are a stark and powerful contrast to the meat of the poem.

Horror plays a part too, in the cycle ‘Myth and Legend’, which are the most recent uncollected poems. ‘The first four ships’ suggests Christchurch’s much-vaunted settler history, but is about the idiocy of predatory tourism. In ‘Photo opportunity’, Farrell satirizes the tourist’s amnesia, the names we will either never know or forget immediately:

‘As we approach the river of

forgetfulness, you will notice

‘ABC’ in the same cycle is poem as horror film – children getting sick, running for the sea and dying from diseases brought by strangers. This is serious stuff – but it is leavened by humour, both wry and laugh-aloud in many of the other poems. A keen sense of the ridiculous combined with clever lexicography serves the poet well in ‘Sound tracks’, where drunken speech in a piano bar is transcribed:

The poem in its entirety needs to be read aloud to get the full brilliance.

Humour enters other poems too, particularly ones that seem to be aimed more at young readers, i.e., the punctuation poems and ‘Mrs Pig’.

If I was to choose a favourite from this substantial offering, I think it would have to be the autobiographical poem ‘In a nutshell’, an elegy for Farrell’s mother. It’s full of emotion – not only at the loss of a beloved parent, but also with the examination of sibling relationships:

‘In her house, my sister slams

and I yell, chucking death out.

We are huge with grief, two

fat babies struggling to get a

Farrell writes of how we remember things our mothers told us, particularly at bedtime.

say. ‘Roll over. Face the wall

and you’ll have good dreams.’

And on wet nights, rain in the

‘It’s a fine night, good for

This is one of the longer poems in the volume, where the poet gives herself time to fully explore and experience her subject. Some of the poems seem to be cut off before their prime, but this one gives us a full portrait of the woman as mother and individual, her beliefs, her friendships, the music she loved, and the poet’s characteristic tough-minded, clear-headed acceptance of her loss at the end.

All things done and said.

My mother in a nutshell.

A collected verse such as this gives the reader a chance to see how the poet has developed over the decades. I am looking forward to seeing the ‘Myth and Legend’ poems gather companions until they are numerous enough for a collection of their own. Poetry, as Farrell ably demonstrates, helps us to come to terms with the worst of the world and also to celebrate the best.