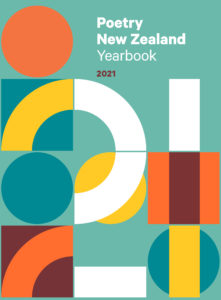 Even for a poet, the offering of nearly 400 pages of poetry, essays, and reviews in the Poetry New Zealand Yearbook 2021 seems on first glance to be, possibly, maybe, too much. After all, eight of those pages are just the contents; it seems more an anthology than a literary journal. But really, what’s the difference? It’s also generous; it’s also thrilling — the idea that there is so much poetry being written in Aotearoa that editor Tracey Slaughter’s whittled-down selection of two months of submissions, a year’s worth of work, fills what could ostensibly be termed a tome.

Of course, there’s no requirement to ingest it all at once. The order is alphabetical by poet, suggesting a reader dip in and out at their own pace. Picking and choosing is made easier by the huge variety of titles on offer — you could read ‘Luna sends me a dream of chickens’ or ‘bra dollars’ or ‘in hindsight denying that it was a phase was a clear indicator that it was a phase’ or ‘Bread’. Something pastoral, something ephemeral, something glutinous — truly, something for everyone.

Tracey Slaughter’s editorial is densely lyrical. There’s nothing casual about it; she calls on Rilke, Auden, Robin Hyde, and Anaïs Nin, among others, to plead the case of poetry’s place in our new pandemic-shaped world. Slaughter’s passion for the work she’s brought together is evident, but I wish we could be more matter-of-fact about poetry (though that seems, I know, like an oxymoron). I wish poets could be confident that we’ll be allowed to do our work without needing, once again, to justify its cultural value. We’re not there yet, although journals as generous and wide-ranging as this one may be helping to push us in the right direction.

Each year, the Yearbook showcases a chapbook-length collection of a single featured poet that prefaces the individually selected poems, and this year it’s Aimee-Jane Anderson O’Connor’s collection, Arterial. The best poems in this set are, for me, the prose pieces, made of muscly voice and fluid movement. ‘Dissection’ begins in a high school biology classroom and ends with ‘Hearts sunk in glass conches like great mottled clots’, journeying from clipped, prosaic narrative to hammering assonance and imagery straddling the real and the fantastical. In ‘Life Education’, again the body becomes other, becomes lumps and cords of unfamiliar colours: ‘Her intestines and lungs and heart are made of pink and red and brown and peach. He dims the lights and she glows like lava.’ Its classroom-to-body-horror trajectory is echoed throughout Arterial, an uncanny familiar to all of us who experienced Harold the Giraffe rolling up to the school carpark in his white truck. These prose poems are torqued and transforming, and showcase Anderson-O’Connor’s skill of delicate shock.

The most useful and joyful way to review the 2021 Yearbook is to focus on its gems, and by gems, I mean the poets I’ve newly found and delighted in, the pages and lines that shine to my eye, though there’s nowhere near enough space here to praise them all. Liam Hinton’s two dog poems bumped into me crunchily — I felt the way I imagine a pedestrian feels at the moment of collision with a speeding bicyclist, except it was just good poetry. In ‘dog i (the dog reflects itself in other dogs)’, Hinton’s speaker empathises with the family dog at the end of its life:

if you were to put me down
id have questions

…..she must have wondered

…..why we were hurting her

i hope she found that confusing

These poems are aware of their potential for saccharine sentiment, and avoid it with harsh surprise. They’re more-than-dog-poems, and also just dog poems: poems about the creatures we love and the terrible things we do to them.

Similarly gentle and hurtful and stunning is Katie Winny’s ‘Waikaraka Cemetery Song’, in which a speaker wanders through the long grief of losing a parent. Here, the balance is admirable — sections of short lines against sections of longer lines, and the familiarity of chat against the slow burn of metaphor. The speaker as daughter is ‘a warm/shining pot from the kiln,/a candled clay debut,/crazing and crazed/by the heat of you’.

Gabi Lardies’s ‘untitled (piss)’ is an irresistible villanelle. Its repeated lines — ‘we piss beer in your compost’ and ‘you said I have to wait for sweetness’ — form a delectable dichotomy of gentleness and muck, and eventually the waiting becomes the compost, and the compost becomes the sweetness. Miriama Gemmell’s contrapuntal ‘turf’, a sequence of monosyllables (‘scooping lyf magic as ho key po key’), thuds with a fragmented energy echoed in Frances Libeau’s work, cutting and airy and exposed by empty space. And Mere Taito’s ‘Chicken bone’ thrills with rage: ‘one night of misplacing a penis will kill everything’.

It’s tempting to dig through the contents pages to pair poems up like siblings. Nikki-Lee Birdsey’s ‘31/3/20’ with its ‘gently falling evening’ is the older sister of Pippi Jean’s ‘11.11 pm’ and its clouds that ‘wring/the odd star out of the dark’. Aotearoa still bursts with potential for odes to landscape and flora, and this Yearbook delivers, gloriously. Birds are everywhere, the sea is everywhere. But the natural here is almost always a little broken. There’s Iain Britton’s juicy ‘crushingsunberries@daysbay’:

coagulates on a fractured autumn

There’s Elizabeth Morton’s ‘An invitation to the monogenetic field’, melding mundane domestic sinks and clotheslines with the gargantuan natural world in a lacklustre, and strangely compelling, way:

And there’s Rebecca Hawkes’s signature, disgusting, biology-doing-what-it-shouldn’t style in ‘When Nicolas Cage said ‘I can eat a peach for hours’ I really felt that’:

And all these poems, though there are so many, though they keep going and going, don’t drown each other out, but rub up against each other for warmth.

Still, one of the most obvious groupings of work here is the three poets who confront James K. Baxter in the wake of the 2019 publication of his letters. Erik Kennedy’s ‘Letter to James K. Baxter’ takes on the charade of a direct address, its structure of rhymed or slant-rhymed quatrains building the most sustained, rhetorically charged, prosaic confrontation of the poet. Rachel J. Fenton seems to slip Baxter in as an allusion in ‘Re-piling the Shed’, but slyly twists the poem’s ending into the other side of that story: ‘No one mentions/the poet’s wife’s name.’ And Janet Charman’s ‘The House of the Talking Cat’ — titled after Jacquie Sturm’s first book — travels the farthest of the three out of Baxter’s shadow to become something of an ode to Sturm. Our ongoing urge to reconsider the place of Baxter in our letters is clear, but I’m also relieved by the glint of light that comes from a change of focus like Charman’s.

The Yearbook ends with a few essays and a handful of reviews, a kind of literary cheese course for the stubbornly hungry reader. Jeffrey Paparoa Holman’s essay, ‘That’s the revolution: Our prisons, ourselves’ stands out in its liveliness. It’s a rejuvenating, humble piece split between Holman’s recounting of a childhood, and of any childhood, with a parent in prison (‘you get to serve the sentence with them, on the outside’); and his time spent now as a prison visitor taking part in a reading group with a handful of inmates. ‘What matters’, Holman writes, ‘is the engagement in the moment that lifts us all — but the prisoners most urgently — out of themselves, out of their sentence, out of their comfort zone, into a taste of ideas and experiences discussed for their own value, without the need for conflict and confrontation.’ There’s nothing self-righteous or dramatic about this essay — it’s simply an invitation to think of poetry, of books, as a way to spend time with each other.

I hadn’t read anything by Winny or Hinton or Lardies, or by at least half of the other selected poets before finding them in the Yearbook, and now I’d like to be delivered a hand-bound wax-sealed chapbook by each of them, and I think this is proof that the collection does what all good journals should: it serves as a vessel of discovery. It gives a writer her reader; it gives a reader the poet she never knew she needed. I don’t know, after a year of closed-off, anxious living, whether I can be convinced anymore that poetry is, as in Slaughter’s editorial, ‘part of our first line of defence’. But this Yearbook proves that we’ll keep on with it anyway, even if only helps us to fill some newly vacant hours in our changed days. The breadth, the weight, the existence of this journal — it’s all an encouragement to us who wonder whether our space on the page is deserved. If a poem holds something tight, like each of these poems do, if it is deliberately written and deeply felt, there is space enough for it.

Sophie van Waardenberg is studying towards an MFA in poetry at Syracuse University in upstate New York, where she serves as co-editor-in-chief of  Salt Hill Journal. Her first chapbook-length collection of poems was published in  AUP New Poets 5.