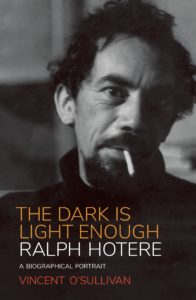 The Dark is Light Enough: Ralph Hotere: A Biographical Portrait by Vincent O’Sullivan

The Dark is Light Enough: Ralph Hotere: A Biographical Portrait

Vincent O’Sullivan has written a comprehensive and intimate biography — not an art history monograph. It’s necessary to state this up front because, although a separation between a ‘life’ of Ralph Hotere and an account of his work as an artist would be absurd, the generous biographical scope, depth and detail of this book both exceed, and provide critical insights into, the conditions from which Hotere made his art. It provides the kind of rich personal detail that a more academic art-historical perspective might have skimped — or might not have sought nor gained access to.

In a lengthy, in-depth interview with O’Sullivan by Bruce Munro in the Otago Daily Times (19 October 2020), O’Sullivan says that his and Hotere’s relationship, ‘… was a congenial friendship — but we weren’t what you’d call intimate friends.’ In 2004, Hotere asked his friend to write his biography. O’Sullivan makes it clear that Hotere didn’t want ‘anyone with an agenda’, which is possibly a careful way of saying anyone from the art world — nor, possibly, anyone co-opting or stereotyping Hotere as a ‘Māori artist’.

The latter was something the artist resisted more by silence than by explicit denial, most obviously to counter the restriction of what he and his art could be, and (the silence suggests) to protect the privacy of those vital aspects of his life and upbringing that were informed by his relationships within Te Aupōuri culture and history. O’Sullivan says, ‘I think my ignorance might have been to my advantage. He realised I wouldn’t be pushing any particular line.’ O’Sullivan’s modesty and Hotere’s self-protective caution constitute a laconic brief for a book that could be written from a distanced and watchful viewpoint (albeit a trusting one) rather than one narrowly defined as Māori, or immersed in the ‘art world’ and over-determined by art history — O’Sullivan records that Hotere often preferred to meet at the pub rather than go to his own exhibition openings.

At this point an elephant enters the room — not art history as such, but its necessary corollary. There are no reproductions of art works by Hotere in this book. This was clearly not the artist’s wish, as noted by O’Sullivan in his understated Introduction to the book; nor was it O’Sullivan’s own decision in what would have been a bizarre contradiction of his friend’s wishes. The result is a detailed narrative referencing numerous art works that we cannot see while reading about them. The reasons for reproductions of works by Hotere being excluded, as well as the reasons why the book was temporarily halted and, in fact, never continued past the time when O’Sullivan was barred from meeting with the artist, are not discussed by him in his Introduction.

The Introduction ends with a forthright and generous disclaimer: ‘I see what I have written as an incomplete portrait, rather than the more desired account of one of this country’s great artists and compelling personalities. Future scholarship will attend to so much more. But as Ralph himself asked me to write on him, and I assured him I would do so, it now seems a personal debt I owe to him, and to his constantly encouraging whānau.’ The subtitle that O’Sullivan has given his book, A Biographical Portrait, with its elision of text and picture, is surely deliberate, even (if I may guess) a challenge or wero.

The question of why this state of affairs came to exist and had the anomalous consequence of an artist biography without illustrations is best put aside at this point; no doubt discussions about it will continue to find their way into the public domain. To date, such discussions include an in-depth article by Mark White in stuff. But for me, one unintended consequence is the book’s weighting towards a biographical overview with the rich and sympathetic presence of ‘constantly encouraging whānau’, friends and colleagues; not to mention the exceptionally scholarly, detailed and generous Notes, Further Reading and Index that complement the book’s research and manaakitanga. Far from being irretrievably impoverished, the book offers a great many ways in which to find images of works by Hotere as well as a rich resource of secondary sources, catalogues and discussions of his oeuvre in a wide variety of publications.

A quick online check-in at Auckland Art Gallery reveals forty works available for viewing in the collection site as well as collaborative works with Bill Culbert and photographic portraits of the artist by Marti Friedlander and John Miller. A similarly perfunctory search at Te Papa finds in excess of sixty works, including major collaborations with Bill Culbert and the monumental ‘Black Phoenix’ (1984-88); the Alexander Turnbull Library archive has 732 ‘results’ including many publications, catalogues and journals with illustrations; and so on. O’Sullivan’s book with its numerous detailed, carefully chosen but comprehensive references can certainly be read as a guide to the substantial complementary resource of unrestricted public archives.

There’s another respect in which the absence of images feels at times like an unintended bonus. Early in the book’s biographical timeline we read accounts of the Hotere family’s life when Ralph was a child. Their first house on land at Taikarawa, north of the Hokianga harbour near Mitimiti, didn’t have electricity; working days began about 4 a.m. — before dawn — when older children rounded up the cows for milking. This story, rather than, or as well as, art-historical models of tenebrism in art, is a sympathetic situation from which to look ahead to Hotere’s mature work, in which darkness, sometimes in combination with white streaks or splatters, came to be a signature effect. In one of the book’s most sympathetic accounts of originating or contributing factors to the darkness in Hotere’s work, O’Sullivan notes that the artist grew up:

… in a household where after sunset, darkness was the norm, a home of candles and lamps and open fires, of golden streaks reflected in expanses of glass, of refractions and shadows and pools of light. The darkness was not only those gradations of te pō that variously carried in Maōri thought deepening notions of vacancy and loss, the notions of what preceded life and followed death. It was also home.

While this and other biographical sketches cannot replace images of art works, they are vivid and complex and contribute significantly to the ‘portrait’ components of this biography. Also significant, as O’Sullivan notes with careful understatement, is the origin of the artist’s Te Aupōuri tribal name, in which ‘au’ refers to smoke or a current, and ‘pōuri’ to darkness, the pall under cover of which the tribe escaped an attack. Such contributing narratives need to be read in association with clear evidence of Hotere’s knowledge of and admiration for the American Ad Reinhardt’s minimalist ‘black paintings’ from the 1960s.

Similarly, the frugality and make-do skills of Hotere’s use of recycled materials, such as rusty corrugated iron sheets, lead-head nails and recycled timber reflect the kind of useful stuff you’d hoard frugally in remote, under-resourced places, not to mention where I saw such careful stores while living near and visiting Hotere’s studio at Port Chalmers and home at Carey’s Bay between 1972 and 1975. At the same time, their markings are often reminiscent of Mark Tobey’s white calligraphy or ‘white writing’, with which Hotere was familiar by the early 1960s, having spent time in England and Europe between 1961 and 1965, including time in Vence in the South of France at the Korolyi Foundation; and their materiality recalls the pitura matèrica of the Catalan artist Antoni Tàpies whose work Hotere knew well before spending time in Barcelona in 1988.

O’Sullivan, in his detailed and respectful account of Catholicism in Northland, notes that the Hotere family lived intimately with the legacy of Bishop Pompellier, the French Society of Mary missionary, during the formative years of the artist’s childhood and youth. The environment in which Hotere grew up was trilingual: Māori, English and the Latin of the Catholic church. It was rich in the images and symbols of both Catholicism and Māoritanga. What becomes clear while reading O’Sullivan’s ‘biographical portrait’ is that it implicitly resists and confounds an all-too predictable model of art history programmed to a greater or lesser degree by distinctions or weighted tension between the benighted, ‘primitive’, narrative art of remote or provincial cultures, and the sophisticated, evolved art of metropolitan centres.

Hotere grew up in a visually and symbolically complex, linguistically rich and environmentally distinctive environment; his subsequent political activism in works such as the Aramoana protest panels was seeded by Te Aupōuri history, as well as by experiences of protest and resistance in London and Europe in the 1960s; the symbolic complexity of his early environment met with and in many respects complemented what he encountered during the Karolyi International Fellowship that enabled him to work and exhibit in France and Europe for several years, and view works, including Matisse’s final masterpiece in the nearby Chapel of the Rosary at Vence. O’Sullivan writes that this was one of Hotere’s favourite places to visit, and his careful account of what grew in the space between Matisse’s Stations of the Cross and ‘those fourteen scenes Ralph had looked at for years at Hato Hēmi in Mitimiti, and as a schoolboy at St Peter’s’ pretty much closes the false gap between province and metropole.

This rich section is followed by one that folds Hotere’s family story into a time of vital transformation. Hotere’s brother Jack was killed while fighting with the Māori Battalion at the Sangro River in Eastern Central Italy in 1943, and Hotere and his wife Bet went to visit Jack’s grave at the Sangro River War Cemetery. The biography includes a family photograph of Ralph ‘kneeling, one arm resting along the top of his brother’s grave, holding against the tombstone the rosary his mother had given him to take from home.’

This, writes O’Sullivan, a ‘deeply personal event, a compelling idea, a dominating public or political occasion, a resonant arrangement of words, would propel him to work on a series of paintings that expanded and diversified until their impelling drive was resolved.’ This was the Sangro series, made, with what would be Hotere’s typical recycling economy, ‘on the dismantled sides of small packing cases’, and marked with ‘the kind of stencilling familiar to young men who had worked on farms or in freezing works or wool-stores.’ O’Sullivan notes that, ‘For the first time Hotere used extensive areas of black, mostly in the wide framing borders. It was also, perhaps, the first occasion that he drew on the specific Māori resonances of what was meant by te pō.’ This series, O’Sullivan suggests, ‘that the visit to Jack initiated was the beginning of what te pō both declares and contains, what it takes to itself, what it allows to be revealed.’

O’Sullivan’s account continues for a further two-hundred and thirty-something pages from this moment; but it remains the pivot around which this rich ‘biographical portrait’ turns into something substantially more than a bare or mere text.

I’m delighted but unsurprised to see this important book among the finalists for the Ockham Book NZ Awards, and I wish it and Vincent O’Sullivan (and Ralph Hotere) the best of luck — hiahia koe ki te pai rawa atu!

Ian Wedde is a poet, fiction writer, critic, and art curator, and the recipient of well over 30 major awards, including New Zealand Poet Laureate and Officer of the New Zealand Order of Merit. His latest novel, The Reed Warbler, was published by Victoria University Press.