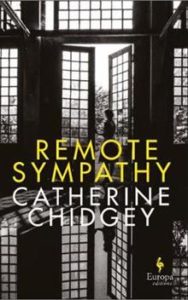 ‘There is no such thing,’ wrote Buchenwald survivor Jorge Semprún, ‘as an innocent memory’. Catherine Chidgey has tested these words before – in her previous novel, the award-winning The Wish Child, she followed two children living in Nazi Germany as ‘the war keeps rolling on like bad weather’. It was provocative, persuasive, utterly readable.

In her latest novel Remote Sympathy – the title itself can be read on a number of layers – Chidgey tests the truth of these words once more. This time, she takes us into the camps themselves, to the Buchenwald labour camp, perched on the Ettersberg hill above the picturesque Weimar village.

Chidgey alternates between three main characters. Leonard Weber is a doctor of Jewish ancestry, inventor of the ‘Sympathetic Vitaliser’, an electrotherapeutic device he believes could cure – cure! – metastatic carcinoma. As he explains, if a singer can shatter glass when her voice reproduced its resonant frequency, ‘couldn’t we shatter a tumour in the same way? By causing its cells to vibrate in sympathy, couldn’t we turn it to dust?’

His invention attracts some interest. A month after treatment, around the time he should have died, ‘my first miracle rose from his bed and packed his suitcase’. But his success – and the survival of his test patient – is short-lived. He is fired from his job due to his ‘difficult ancestry’. His Sympathetic Vitaliser, as he explains in a series of letters from Buchenwald to his daughter Lotte, transported with her mother Anna to Theresienstadt in Czechoslovakia, is lost in the attic of failed science.

Until, that is, SS Sturmbannführer Dietrich Hahn, our second narrator, reads of his work. Hahn, a loving father and husband, was trained at the Dachau concentration camp under SS functionary Thomas Eicke, one of several real-life figures in the book and a key actor in the development of Nazi concentration camps. Promoted to the prestigious role of camp administrator at Buchenwald, Hahn and his young family leave Munich to take up residence in the ‘model’ labour camp. His wife Greta, our third narrator, is desperately hoping for a second child but her inability to conceive is found to be the result of ovarian cancer: ‘That’s what he suspected might be growing in her. Not a child: a tumour.’

Her husband is desperate. Could this machine, trialled a decade earlier at the Holy Spirit Hospital, be the answer? Could this Dr Weber, his trace of Jewish ancestry aside, prolong his wife’s life?

Just as faith in Weber’s device pivots on an unstable platform of desperation, hope and straightforward pretence, so the innocence in Semprun’s quote is strained by increasing evidence of the realities of the camp.

The Hahns’ new home is set within a picturesque forest, a park, a zoo, even a falconry. In Weimar, Greta admires the famous statue of Goethe and Schiller – ‘You see?’ she writes to her mother. ‘We’re quite civilised here.’ Through Weber’s letters, Greta’s diary and the transcribed recordings of Dietrich’s post-war trial, taken from the American Military Tribunal’s 1947 war-crimes trials at Dachau (including the account of Buchenwald camp administrator Otto Barnewald, on whom Hahn is based), Chidgey succinctly, unnervingly, unravels that assertion. A picnic in the park takes Greta close to the barracks, the wisp of smoke coming out of a chimney ‘pointing into the sky like a vast brick finger’ and the pervasive smell: ‘fatty and smoky and too too sweet’. There is the sound of shouting in the distance, dogs barking, a gunshot. ‘What was that?’ asks a jittery Greta. ‘That’s where they bring you if you’re naughty,’ whispers her son’s new friend.

Hahn wrestles with corruption in the camp – ‘rife at every level’ (including his own) – and a system straining under a burgeoning population. Quickly, Semprun’s innocence begins to tear. The casual lies, the sloppy killings, the swastika baubles on the Christmas trees, the thriving vegetable crop (‘It’s the ashes’), the Little Camp with its ‘stinking stables full of Jews and lice and its piles of corpses’. Then the laboratory in the Hygiene Institute housed in Block 50 ­- ‘It was a decent source of revenue,’ reasons Hahn, ‘with pharmaceutical companies and medical institutes paying to conduct their trials inside the camp, where laws around experimental procedures did not apply. I hadn’t known that.’

‘Do you know,’ says Greta’s new friend Emmi, ‘they released some of the Polish child prisoners because they found out they had Aryan blood?’

‘They gave them to good German families. So that’s a happy ending.’

Interrupting these personal records, like a diminished Greek chorus, the ‘one thousand citizens’ of Weimar voice their distaste, their disregard, ultimately their shame: ‘If you don’t eat your soup, we’ll send you up the hill: that was something we told our children when they misbehaved.’

The tension mounts, building on the failure of Weber’s machine, the progression of Greta’s illness (Greta’s death would end Weber’s protected status and presumably that of his wife and child) and the ever approaching forces of the Allies and the Red Army.

Any comprehension of the Holocaust, wrote Australian historian Inga Clendinnen, ‘poses almost direct threat to our confidence in our own personal integrity’. There is no culpability, she added; rather, the simple fact that those involved were people ‘very like ourselves’.

Like Semprum and Primo Levi, Chidgey describes Clendinnen’s ‘surreal rationality of the camps’ with calm restraint. Unlike these writers – these camp survivors – she enters imaginatively into the minds of her narrators to try and understand why people ‘very like ourselves’ can undertake or justify or ignore the atrocities that occurred at camps such as Buchenwald. This challenge is not entirely met. Greta suspects but does not see; her husband sees – even orchestrates – but is blind to any ‘remote sympathy’; the people of Weimar swing between blame and feigned ignorance. As readers, we are left with horror and, as always in relation to the Holocaust, bewilderment. But in its deft melding of fact and fiction (Weber in particular is finely drawn), its skilful examination of human sympathy and faith, its dramatic tension and quiet lyricism, Remote Sympathy takes us bravely, compellingly, into the uncertain heart of human complicity.