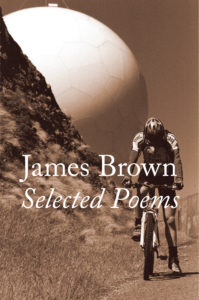 I got a small shock when the review copy of James Brown’s new book arrived from the publishers. The packet I pulled out of the mailbox was much more substantial than I was expecting. First thought: this is not the slim volume I had imagined from the writer who describes himself as ‘a Sunday poet who fell in with the wrong crowd’. (He sure did – seven slim volumes of the wrong crowd and counting.)

Second thought: James Brown has got to the Selected Poems stage of life? I was a student working part time at Unity Books in Wellington when Lemon (1999) and Favourite Monsters (2002) came out. Somehow, despite the significant passage of time, the James Brown of my mind hadn’t grown up. (Sorry James. Mind you, quite a few of the poems in Selected Poems point to the James Brown of James Brown’s mind, who doesn’t necessarily seem to have grown up either. So perhaps we are OK). I’ve got my copy of Favourite Monsters on the desk next to me. The pages are a bit yellowed, and I suspect that little Anna and Tessa, who feature in the poems and in the author photo on the back, are out of pinafores and pigtails now. Heaven help us, the world being what it is, they may be plotting first books of their own.

Which is to say that James Brown, Sunday poet got caught, sly disrupter of poetic expectations from inside the machine when I was a girl, is now part of the canon. That’s what it means to have a hardcover Selected Poems.

Much of James Brown’s modus operandi is dissing poetry. He has a lot to say, tongue-in-cheek, on how staged the game is (see the ‘useful non-fiction booklet Instructions for Poetry Readings’), how weird and kind of boring poetry is (e.g. the bonus poem, ‘Secretly you like poetry…’ on the back of the Selected) and how poets should just get over ourselves and it (the ‘it’ being poetry). On page 85 we read ‘you haven’t finished a novel/ or a short story, or got anywhere near Java,/ and there are bills to pay, children to feed, etc’ – followed by this definitive statement: ‘So the day I stopped writing poetry/ I felt strangely serene./ 3:44am, Wednesday, November the 3rd, 1999./ That was it-finished.’.

Except it wasn’t. And why not? Because Brown is so damn clever at it. So he keeps on down the poetry mine, pick and shovel in hand, a few wry glances at the audience over his shoulder.

Apart from the reflexive self-deprecation of the schoolboy nerd, two other things struck me as I worked through and around and back through this book. How gifted Brown is at the craft of poetry, the game of word and sounds on the page that are tidy and tight and clever and cool. And also how he lifts aside that cleverness to show us the tender inner self, the moist soft core of James Brown and his world.

First to the cleverness, the show pony in James Brown. There are the famous ones: ‘Cashpoint: A Pantoum’ and ‘Popocatepetl’. Cashpoint is a found poem put into an old and cunning form – the pantoum, a series of quatrains where the second and forth lines of each stanza are repeated as the first and third lines of the next stanza. ‘Popocatepetl’ was, as the note at the back of the book says, originally published as ‘a set of ten cards that could be read in any order, except for the first and last stanzas’. I have heard Brown read ‘Popocatepetl’ and it was a delight.

Those are two particular examples of the gleeful love of craft that suffuses the Brown oeuvre. There are plenty of other moments of skill and slight of hand to discover, like ‘Gloss’ (even the title explaining itself), ‘Dan Chiasson’ (the poet telling himself off) and ‘Willie’s First English Book’, where found poetry acts to bring the past and its oddities and cruelties into the present, where our still current oddities and cruelties reflect painfully off them.

And then to the moist soft core. ‘Feeding the Ducks’ from Favourite Monsters starts: ‘We are all all right. Dirty and bedraggled,/ but all right.’ And ends: ‘I add my jersey with its wet hug-print down the front./ The fire will not light. Anna remembers the ducks/ laughing.’ The intimacy and vulnerability in this poem leave the sly glance over the shoulder entirely behind. This is poetry as heartfelt communication. This also is why Brown can’t put down the pen and shut up. Because here we are in this world, having things happen and seeing things and feeling things, and if you are wired a certain kind of way (which he clearly is) you just can’t help but need to write things and feelings down, in a way that gives them edges and shape and that you can pick up again and read and say – yes. That’s how it was, how I felt.

A poem that touched me with similar intimacy is ‘How I Write My Love Poems’. It begins in poetry land, with word play and talk of grammar, and gets closer to the heart as it goes, passing through ‘chance fattens like an ambulance, until/ breasting a widow’s peak, the heart upholds/ its tall story’, to the compelling ending: ‘sudden delicious Braille, a ribcage’s/ brimming xylophone, the unwritten/ rules of engagement/ making a home.’

This book, all 240 pages of it, show a highly active mind, alternately delighted with and tired of its own capabilities, leading its owner a merry dance through the world of writing poetry. And also the heart of that owner comes through, saying to the mind – it’s not all wordplay. Some things can be said plainly.

Craft and control and depth grow, as one would expect over time, but the core James Brownness of the sentiment and execution – the un-grown-up observer, un-grown-up in the sense of still not habituated, not blasé about the world – remains steady. Perhaps my favourite part of this engaging and important book, the most James Brown-esque moment of them all comes on page 236, just before the index of titles. It is the last note of a couple of pages of notes, this last note referenced to page 236 (itself): ‘Thank you for reading’, it says.