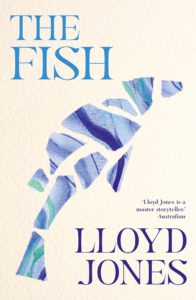 The Fish by Lloyd Jones

The Fish
by Lloyd Jones

In Lloyd Jones’s The Fish, a wayward daughter gives birth in a foetid caravan by the sea. The baby is different—so markedly different that his grandfather refuses to hold him. Our narrator, the child’s young uncle, watches his family shift to accommodate their strange new kin, their Fish.

Jones’s last novel, The Cage, was an unsettling commentary on the murkiest parts of human nature—the way we can acclimate to terrible conditions, and grow indifferent to brutality. A rich allegory, the novel takes place in what Nicholas Reid called ‘the non-specific world of fable’—somewhere faintly recognisable as New Zealand in a dystopian future—and contrasts its detachment against a deeply affecting darkness.

In The Fish, the same allegorical tone pervades (with its accompanying vagueness), only this time it grows frustrating. The novel is described as an exploration of family bonds, yet it treads so lightly over the detail of domestic life, all its charming and bitter idiosyncrasies, that nothing feels sufficiently examined.

You may spend the entire novel wondering what the hell is going on with ‘the Fish’. His ‘fishiness’ is exaggerated in early chapters: a piscine odour overwhelms his mother’s tiny caravan, and on several occasions he is alleged to have gills. Descriptions of the child—alternately referred to as him, our Fish and It—focus on his wide mouth, his loping movements and bulging eyes. Our narrator says, ‘It is a fish, yet we have to pretend it isn’t.’  Given the mystery surrounding the baby’s conception, you could be forgiven for suspecting some deep-water tryst has taken place, à la The Shape of Water.

However, as the Fish grows and his tragic mother fades into the backdrop, so fades our sense of the ethereal. Jones includes occasional detail to help root us in time and place, mainly Wellington in the 60s: Norman Kirk is leader of the opposition; chocolate milk has yet to reach our shores. Perhaps the Fish is meant to illustrate how a family will reckon with their illegitimate, disabled grandchild in an unforgiving era: material lack, intolerance and dysfunction meet at the birth of a unique baby, in the airless confines of an old caravan. The narrator alleges that ‘mostly’ family members ‘dote on the fish because we cannot offer its mother the same.’ This doting is largely mentioned in summary rather than shown in scene. The Fish’s grandmother, we’re told, is one moment ‘all over the Fish. But she can also be awful to the Fish, severe when it misspells a word (“For God’s sakes… you halfwit.”)’

Perhaps this suggests the novel is examining our capacity to love and be ashamed of someone in equal measure, and the way that shame stings in the gut precisely because love is its source. The Fish is not the only source of shame and object of love in the family: his (unnamed) mother and aunt Carla are both, according to the narrator, promiscuous; they both have illegitimate children and no long-term relationships with men. But ultimately, the narrator seems indifferent to the humanity of his nephew, his grief at the various family losses in the novel (‘will I ever see the sun again? Or a flower, a fruit tree in blossom?’) fake or overwrought.

The climax of The Fish borrows its emotional heft from the Wahine disaster, and it is a gripping extended sequence in the final third of the novel. By the final pages, Jones has rinsed three family members from the story—washing them away without giving them real agency. The narrator is a passive observer to a fault. His bereaved mother takes a solo trip to Greece, leaving her teenage son to care for the Fish. The Fish goes walkabout, and teenage son sits at home, inertly wondering if either will come back. Later, he takes his own trip to Australia, to visit Carla, his distant elder sister. When she stands him up, he lingers in doorways for a few days before returning home and never speaking of the trip again. Perhaps Jones is interrogating some retro Pākehā impulse to swallow difficult emotions? A cultural hangover from their stiff-lipped forebears? The novel, too often, is the story of unexamined depths.

One of the most memorable images in the novel arrives when the family has a holiday in California, and spend the night in a hotel across the street from the San Diego city jail. Each night, yearning women line the pavement in front of the prison. All at once, a flurry of love notes erupts from the top-floor windows, swirling confetti to be swept up and redistributed by the waiting molls. The moment swells on the page, only to deflate when the next day the narrator (then a teenager) unfolds one of the remaining notes—revealing a hackneyed promise to reunite in Mexico, implausibly written in English.

This scene, despite its cinematic qualities, does not quite seem to fit in the novel, perhaps because we have no idea why a family trip to Disneyland in the 1960s included several nights in San Diego. I was frequently pulled out of the story by incongruous or anachronistic detail—wondering if this family could really afford to fly their daughter home from Seoul in a pinch, or move a dilapidated caravan via helicopter, and when exactly would pizza delivery have entered a New Zealander’s frame of reference? At one point, the narrator questions why ‘a banknote with the picture of the man who climbed the world’s highest mountain’ is ‘worth more than a banknote with a picture of the national bird whose achievement lies in being?’ This comment was confusing, sending me one hundred years-deep into the Reserve Bank’s currency: I know Hillary appears on the five-dollar note, but the narrator’s big point implies the kiwi appeared on something smaller, a one-dollar bill. This hasn’t been the case since decimal currency was introduced. Is the narrator comparing a ten-shilling note of old with a five-dollar note introduced in the 90s? (Also: there are endangered native birds on all our bills, including the $50 and $100 bills, far out-ranking Sir Ed.) The narrator’s grand statement only works if the comparison holds, and if readers aren’t distracted away from the story because of lack of care with detail.

Jones is an accomplished writer with an international reputation, including a Commonwealth Prize for The Book of Fame and a Booker Prize-shortlisting for Mister Pip. More recently, The Cage was a finalist in the Ockham NZ Book Awards. Perhaps what was seen as imaginative and stylistic strength in that novel—the archetypal characters, the ‘fable-like’ lack of specificity, the focus on allegorical meaning—is less successful in The Fish, with its grounding in a specific place and time. The realism of the novel is inconsistent; its fabulous elements are inconsistent. Like the Fish himself, the book is neither one thing nor the other.

Cait Kneller is a fiction writer and bookseller from Auckland.