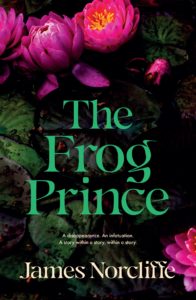 The Frog Prince by James Norcliffe

The Frog Prince
by James Norcliffe

Before they were fodder for children’s books and movies, fairy tales were women’s stories. Tales told by grandmothers, mothers, aunts, sisters, daughters, shaken down through generations, details shifting with each retelling. Spoken to one another over repetitive work, like mending clothes, preparing meals, and spinning wool, these narratives were filled with the things women desired — a prince, a safe home in a castle, a happy ending; and also full of the things they feared most — the loss of their children, violence from men. When the Grimm brothers Jacob and Wilhelm first published their collected stories Nursery and Household Tales in 1815, the book was aimed at an adult audience, and found few readers. Further editions of the tales were heavily edited, to market the book as children’s stories, cutting out all the sexual references. Rapunzel’s pregnancy from her prince’s visits was erased, and the story of Hans Dumm, who could impregnate women simply by wishing for it, was taken out of the book altogether. These changes saw the book’s popularity skyrocket. But they weren’t the only changes. The changes increased the violence, particularly in retribution for terrible behaviour, and shifted language around women, creating a series of stories that saw well-behaved, god-fearing women rewarded, and badly behaved women punished.

It’s interesting to keep all this in mind when you read James Norcliffe’s first novel for adults, The Frog Prince. A charming novel that explores the possible origins of the fairy tale ‘The Frog Prince or Iron Heinrich’, Norcliffe employs a neat dual narrative structure to understand how stories change when ‘context changes’. In one thread, we’re in contemporary Europe, where David has been travelling with his colleague and girlfriend Cara during their term break. They both teach at Huntingdon, an exclusive boarding school in France. David is an old-fashioned New Zealander who wears ‘disreputable tweed’ with a ‘mismatched tie’ and ‘frivolous socks’; Cara is a sexy American full of contradictions: ‘open but private, light-hearted but serious, enchanting but infuriating’. Despite their contrasting personalities, they’ve fallen into a relationship.

David is certain he’s in love, and on their holiday he proposes marriage. Cara refuses with good grace, though not long after, she vanishes. David is distraught — where has she gone?

In the second narrative, a manuscript written by Cara, we skip back to 1810, and follow the Heller sisters Mathilde and Helga as they record their oma’s stories to take to the Grimm brothers. On their first trip, Mathilde develops a crush on Jacob, the elder Grimm brother, an infatuation that’s implied to be inappropriate. Desperate to have him notice her, Mathilde and her sister take more stories, and their circumstances force them to invent more than excuses to remain in his presence.

The two stories are linked through their common themes: unrequited love and the undercurrent of the Frog Prince story. In Cara’s manuscript, the Heller sisters write the Frog Prince story; in the modern world, we must follow meaning in the tale to understand Cara’s motives.

Norcliffe’s writing is jovial and sweet, and the gorgeous cover rightly indicates the light-hearted fiction within. Though some of the passages are dialogue heavy, there’s a wonderful warmth in the style and tone. The scenes set at Huntingdon toy cleverly with the dynamic between headmaster, his wife and the school staff. A highlight of this section is Angus, Huntingdon’s prickly art teacher. This jollier part of the novel is countered by a fascination with the ‘Forest’, the dark forest where Mathilde’s oma insists not only are all fairy tales set, but is also the place ‘where we all live.’ Dream sequences add a sense of foreboding to the narrative, and alongside Cara’s disappearance, the novel seems set for a climax of fantastical proportions.

We’re given hints of dark outcomes: Cara’s father Martin warns the school headmaster that his daughters will one day stab him in the back — ‘They’re probably sharpening the knives right now’, and one of the endings for the ‘Frog Prince or Iron Heinrich’ that is mentioned is one where the princess, instead of kissing the frog, ‘actually hurls it against a wall.’

The work doesn’t quite build to those promises, and instead of leaning into the magical elements of a fairy tale retelling, David’s story is tied to reality through tours of World War II memorials and a reconnection with his family in New Zealand. A health scare for David at the top of a belfry tower at the Hôtel de Ville is the closest we get to any true disaster, and through his journey the connections between the modern story and the fairytale seem less clear: who is the frog? Who is the princess? And who, of all the characters, is Iron Heinrich?

The novel is about lust and infatuation and love — David loves Cara and others lust for her; Mathilde loves Jacob — yet there’s no visceral sense of it: there’s no recollection of the physical intimacy that must have existed between David and Cara, and his love seems to be based on a very one-sided friendship. There’s the hint of sex, the shadow of it; however, much like the neutered fairytale written by the Heller sisters in Cara’s story, it’s reduced to allusion.

By telling the main narrative through David’s point of view, Cara is diminished to a mystery, a memory. David is angry at her for disappearing, which is understandable, but there’s also a sense he’s angry because she refuses to behave in the way he wants. There’s an echo of the fairytales that Wihelm Grimm edits, making the women more domestic and subordinate. David sends Cara countless emails, demands to know where she is, and he’s full of presumption about how he fits into her life. By largely witholding Cara’s perspective from the story, and revealing it mostly through inferred metaphor in her manuscript, Norcliffe takes the fairy tale from women and attempts to discover male desires and male fears, reversing the original meaning. The subversion isn’t without pleasure, yet the novel’s conclusion is slightly underwhelming.

And yet — The Frog Prince is a delightful novel about the power of love and the stories that shape our lives. Entertaining and engaging, Norcliffe’s gentle style will appeal to many readers.

Josie Shapiro is a writer from Auckland. Her short fiction has been published in takahē, Newsroom, The Three Lamps and Ko Aotearoa Tātou / We Are New Zealand (OUP, 2020).