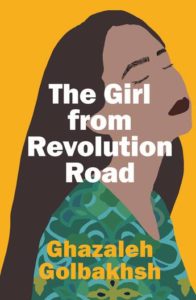 The Girl from Revolution Road by Ghazaleh Golbakhsh

The Girl from Revolution Road
by Ghazaleh Golbakhsh

Ghazaleh Golbakhsh is an Iranian-New Zealander best-known as a filmmaker; her most recent documentary series is This is Us, centring on Muslim New Zealanders, currently screening on the RNZ site. Representation is everything, she says. ‘This incessant need to be like everyone else is not just a cultural thing attributed to immigrant kids. It seems universal for nearly all kids because anything that sets them apart can be used as a cause to mock.’

The Girl from Revolution Road is her first book, an absorbing collection of essays that explore her own experiences. These range from her early childhood in Iran, including the catalyst for her family’s move to Aotearoa (a night they all spent in prison: she was six years old at the time) to lively summaries of men she’s met on Tinder, and a résumé of jobs she’s clocked up along her path, from X-ray filer to barista.

It’s a rare thing to come across essays that speak so directly to my own experiences of growing up in Aotearoa. Much resonated with Golbakhsh’s personal recollections: her family fleeing a country awash in bloodshed and turmoil; people assuming that you don’t speak English; being told that your culture is barbaric, and confronted with people behaving in an openly racist way while everybody else looks away. So many painfully familiar moments, so much wincing in solidarity. ‘As every screen around us broadcast the hostage crisis in real time,’ she writes about the 2014 Lindt Café siege in Sydney, Australia, ‘we sat in the breakroom not able to talk about anything else. [A colleague] let loose. “This is terrible! Why the fuck aren’t we bombing them all?”… He kept on with this offensive vitriol so much that I physically could not stand it. Not one for confrontation, I decided to slam my lunchbox shut and storm off.’

Despite the often heavy subject matter, Golbakhsh’s tread is light. The essays are often darkly funny: ‘He received his draft papers shortly after his eighteenth birthday. While his mother wailed with worry, Babak thought how it wasn’t even the worst birthday gift he had received. That accolade went to a pack of playing cards his dad gave him before he left the family when Babak was five.’ Some humour is at her own expense, especially around her dating disasters. One potential romance withers on the vine of a freak accident. ‘I will always have this one regret: the great German lover that was not to be and the stupid bloody tent spike that ruined it all.’

Through this tour bus of politics, history, pop culture, personal relationships and film, Golbakhsh steers us through small, intimate recollections against a backdrop of history in the making. On being incarcerated at the age of six: ‘My mum goes full-on Mother Lion and demands the police give her access to a kettle so she can whip up some formula. Despite holding a weapon, the young policeman looks terrified and agrees, running to get one’.

When her Aunt Shideh finds out that one of her students has been killed in a bomb attack, she ‘goes to her classroom and looks to the empty seat where Tanaz used to sit. A small bouquet of white lilies has been placed on her table. Even forty years later, this image stays with her.’

Each essay ends without overstaying its welcome, though some endings are too abrupt, and promising exploration is abandoned in favour of an obvious conclusion. ‘Brown Girl in the Ring’ is just warming up when Golbakhsh gives a description of an early Whoopi Goldberg skit (E.T from E.T. the Extra-Terrestrial stays on Earth, turns gangster and accidentally kills his family) and then a final paragraph explaining the difference between assimilation and integration. ‘Integration,’ she writes, ‘asks you to include yourself in society as yourself. It does not ask you to murder your past.’ I don’t disagree, but such a definitive statement feels rushed in its placement next to an anecdote about American comedy. In ‘The King and I’, Golbakhsh recounts a single night of working as a waitress in a strip club. Her conclusion: ‘Strip clubs are just another example of the horrors of capitalism, devoid of meaning and overtly sexist, racist and downright unhealthy for everyone involved.’

There are lines which beg to be unpacked further. ‘It’s probably best not to focus on the irony that Iran’s religious police, who violently resist any Western influences in their land, are still using American imported guns,’ she writes in ‘The Legend of Seven Men and Seven Women,’ declaring hypocrisy to be ‘an important trait of oppressive regimes’. It is not obvious to me why it’s ‘best not to focus on the irony’- not because I need convincing that hypocrisy is an important trait of oppressive regimes, but because hypocrisy is, unfortunately, a large part of the human condition. I’m sure that on a good day, I’d be able to muster up five hypocritical acts before lunchtime. Greater attention to processes of observation and analysis, and allowing the details to do the work, would have given some essays more substance.

Many of the essays here tackle the headlines: the Islamic Revolution, the 1980 Cultural Revolution, the Iran-Iraq war, Sept 11, March 15. But Golbakhsh reminds us that people are far more than the dramatic headlines we’ve come to expect. Sensationalism may serve, in part, to shake us out of our parochial stupor and take notice of world events, but at the expense of individuals, balance and nuance. As well as talking politics, she discusses the way Iranians love a good picnic, their dedication to dressing up, the intricacies of wrapping a headscarf, how to use a Hafez book. These details are an excellent reminder that the continual focus on tragedy means concentrating on what differentiates and divides us, not our shared humanity.

Wry observations, sometimes encased in brackets, remind readers here in New Zealand that progressive attitudes aren’t the sole domain of the West – a call-out to those who are only interested in differences, especially the differences which put immigrant New Zealanders at a disadvantage or reinforce ideas of the primitive ‘other’. The Girl from Revolution Road offers a fresh and vital perspective, and Golbakhsh is not a solipsistic or navel-gazing essayist. The collection may offer a peek into rock pools rather than a dive into the depths. (Perhaps the clue is in the packaging: the bold cover design, the large font, each essay given its own title page.) It’s the first word rather than the last, but still: The Girl from Revolution Road is an important book. An excellent gift for every racist relative who won’t shut up. There’s a better way forward and it’s this: listen.

Angelique Kasmara  is a writer, editor, translator and reviewer from Auckland. Her novel Isobar Precinct, winner of the 2017 Sir James Wallace Prize for Creative Writing, and finalist for the 2019 Michael Gifkins Prize, will be published in 2020. Some of her work will be appearing in the upcoming anthology Ko Aotearoa Tātou | We Are New Zealand.