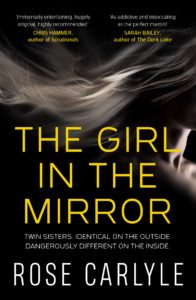 The Girl in the Mirror by Rose Carlyle

The Girl in the Mirror

It’s a twin thing. The sort of thing non-twins do not understand but rather suspect: the knowing looks, the shared impulses, the empathy, the uncanny ability ­- in identical twins anyway – to pass themselves off as the other. It’s the stuff of holiday time movies, classroom antics, pub braggadocio and family legends. It’s also easy fodder for darker tales of rivalry and psychological game-playing.

In The Girl in the Mirror we meet twins Summer Rose and Iris. As Iris tells us, ‘For the first twelve days of our life, we were one person. Our father’s brains and our mother’s beauty swirled into one blessed embryo, the sole heir to the Carmichael fortune.’ The fortune is that of their father, the decidedly unbrainy Ridgeford Carmichael, owner of half of the beachside town of Wakefield in Australia. But then, on the thirteenth day, ‘we split.’ Here endeth the blessedness. The ‘rupture’, we are told, was imperfect, leaving not identical twins but mirror twins, each a literal reflection of the other. Summer’s higher right cheekbone is Iris’ higher left cheekbone; Summer’s right handedness is Iris’ left handedness, even Iris’ organs are on the ‘wrong side’ of her body (this is not unknown – in rare cases of situs inversus, a ‘mirror twin’ may have internal organs such as the heart, stomach or liver on the opposite side of their usual anatomical position). Summer is the ‘it’ girl, explains Iris, ‘a blonde bombshell. And I’m her mirror.’ This gnaws away at Iris’ confidence. Beautiful, sunny, sweet-natured, self-assured Summer is loving and loved perfection; beautiful but prickly Iris, the second and unexpected birth, ‘the surplus twin’, is left feeling insecure, unloved, obsessed with her sister.

Misery on misery, indignity on indignity. The just-too-awful kindness that prompts Summer to allow her sister to wear the golden sash of the inaugural Wakefield Beach Junior Beauty Pageant that she herself has won; the oh-so-handsome and romantic Adam who sweeps Summer off her feet; the inadequately disguised favouritism of mother Annabeth. Underlying this unwinnable contest is the will of their father. Rather than splitting his vast fortune among his seven children (by two different women), Ridge leaves it all in one eye-watering hit to the first child to give birth to a baby that will carry his name: ‘Like a medieval lord, he wanted it to stay together for as many generations as possible.’ The ugly race is on and, apart from gay brother Ben, no one comes out of this well. Iris gets a desperate call from her twin in Thailand. Summer and Adam have overstayed the import permit for the family yacht Bathsheba but Adam’s young son is in hospital and can’t be left – would Iris fly over to Phuket and sail the yacht, with Adam, south across the Equator to the Seychelles? Like, now?  Iris – ‘failed job, failed marriage and failed life’ – agrees, for the less than honourable promise of spending time with her rich and handsome brother-in-law. But once in Phuket, the plan changes. It is Summer who will accompany Iris on the two-week sea journey, just the two of them, all alone, in the big, wide, unseeing ocean.

First-time novelist Rose Carlyle is a lawyer and an able seafarer herself. She has crewed on two scientific yachting expeditions to the subantarctic islands; she and her young family lived on her own yacht in the Indian Ocean for a year. Her account of Iris’ deep love for the ocean and and the twins’ seagoing voyage is clearly steeped in a deep understanding of, and respect for, sailing. After completing a creative writing Masters course at University of Auckland, she ditched an earlier novel to work on this, her first published book. Already it’s been hailed as a publishing triumph. International rights have been bought by HarperCollins USA, the book has been sold into four different languages and a movie deal has been signed. As it should. With shades of Dead Ringers and The Talented My Ripley, the plot charges towards the dramatic denouement like a sloop on a trade wind as the true natures of Summer and Iris and the madness inspired by a cruel and unethical inheritance become apparent.

Building the required scaffolding for the story is not as smooth. Descriptions of Iris casually trying on her sister’s underwear ‘to see what Summer looks like in these’; Summer’s desperate description of Tarquin’s ‘pee pee’ swelling excruciatingly ‘and there’s something seeping out’; the deeply disturbing ‘sexyrape’ initiated by Adam; the blithe inattention of Annabeth; even the cast of relentlessly rich and beautiful characters (everybody, but everybody, is rich and handsome or beautiful, except for poor, pregnant Virginia with her double chin and ‘elephantine thighs’) – all make for a strained and often uncomfortable climb to the pivotal scene in the middle of the Indian Ocean. From here, however, the pace picks up, the suspense heightens, the tangled twists of the plot tighten until we are left, breathless, at the last, game-changing sentence.