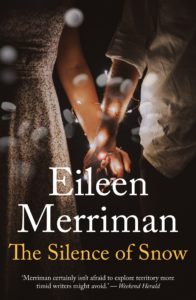 The Silence of Snow by Eileen Merriman

The Silence of Snow
by Eileen Merriman
.

The Silence of Snow meets the brief with aplomb.

Within the first few chapters, we are thrown into a world of oxygen probes and IV cannulas, swabs, syringes, spinal needles and stethoscopes; of acronyms – PCR tests, ED, FOOSH (fall onto an outstretched hand), PEs and ICU reviews and NG tubes; of ceftriaxone, fentanyl, propofol, adrenaline, hydrocortisone and antihistamines. Patients are defined by their illnesses – ‘pancreatitis lady’, ‘the perianal abscess waiting for admission downstairs’ – and are generally rude, stupid (including tourists breaking their ankles while tramping in their jandals) or otherwise obstreperous. Medical staff are invariably exhausted, driven, at times flippant. House surgeons bark out arcane instructions as they whisk in and out of ward rooms: ‘hang some syntocinon’ for a stubbornly slow birth, ‘sats at eight-five per cent on fourteen litres of oxygen.’

What? Never mind. Within this microcosm of medical adventure (and misadventure), Merriman’s book traces the story of young Jodi Waterstone, a first-year doctor at Nelson Hospital, the daughter of a respected cardiologist and a GP, and Scottish anaesthetic fellow Rory McBride, recently transferred from Wellington Regional Hospital. Waterstone is waiting out the next six months before she can be transferred to Christchurch Hospital and join her IT specialist fiancé Fraser. McBride, with his Scottish accent, his love of poetry and admirable abs, is waiting for the results of a medical inquiry. It is nearly Christmas. It is hot. It is busy. The shifts are long. McBride helps Waterstone with a case of ‘query meningitis’; Waterstone introduces McBride to the novels of Karl Ove Knausgård; McBride texts cryptic quotes by Robert Frost and T.S. Eliot: ‘Do I dare / Disturb the universe?’

You know where this is going, right?

But there is a problem. The ‘thing’ in Rory’s past. Unspoken, ineffectively buried, currently under investigation. A tonsillectomy that went horribly wrong. It plagues Rory’s waking hours and gnaws at his sleep in an escalating pattern of flashbacks and panic attacks: ‘Until six months ago, Rory had read two books a month, on average, until he’d lost the ability to concentrate. Not completely; he could focus at work, mostly. It was when he let his guard down, let his mind wander, that the thing moved in.’ To blunt the pain and mask the guilt he turns to the medicine cabinet to quicken Frost’s promise of eventual relief: ‘And miles to go before I sleep.’ Painkillers, sleeping pills, lorazepam – ‘Nothing wrong with a little help of the chemical variety,’ he tells himself. Then, injected propofol, the blood flashing back into the white liquid in the syringe: ‘Ten, nine, eight – Boom.’

With all the markings of a standard hospital romance, The Silence of Snow then changes the game plan.  Halfway through the story Jodi and Rory join friends on a five-day tramp on the Heaphy Track. The story slows down as the claustrophobic urgency of the hospital is replaced with gentle bays and waving palms, the lone call of a morepork, perhaps the snuffle of a kiwi – a natural world that until now is barely registered. It is as if we are back in the land of Frost, wondering which road to take, or what plot line the author will follow. After returning to the wards, Merriman takes us down Frost’s road less travelled, as the pressures of hospital life give way to the pressures on Rory’s psychological state. Deeper, darker, more uncertain; it becomes a slow slide towards an altogether different ending, or an ending to an altogether different story.

Alternating between her two main characters, Merriman is an assured guide. As well as being the author of short stories, four young adult novels and now two adult novels, she is a consultant haematologist at North Shore Hospital. The long hours, the sleeplessness, the rapid near-death emergencies, even the deaths – all are portrayed with the close knowledge, and perhaps necessary disengagement, that goes with the job. But the most successful parts of the book recount a closer, more vulnerable relationship: the close camaraderie of the medical staff; the brief, tender and beautifully written relationship between Jodi and young cancer patient Emma Hardy; and the terrible desperation of a young doctor shackled to the experience of a single and perhaps unblameworthy mistake.