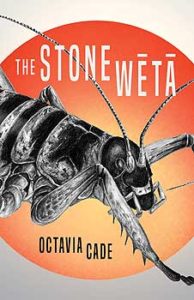 The Stone Wētā by Octavia Cade

The Stone Wētā
by Octavia Cade

Sci-fi thriller The Stone Wētā follows an underground network of twelve scientists smuggling climate data across borders, risking their own lives in the process. In their fight to preserve the planet, they’re forced to take on governments and corporations who are doing their utmost to silence debate, stifle research, and crush scientific evidence.

This is Cade’s first novel for adults; she’s also published a number of stories and novellas, and the junior novel The August Birds. There’s a freshness and boldness of vision in The Stone Wētā, an intricately crafted, near-future narrative, which traverses Antarctica to Japan, the Chihuahuan Desert to the International Space Station. We’re introduced to the scientists by their code names (real names are never revealed), which are taken from an unusual living plant or animal; chapters begin with a few facts about each one in turn. There’s the eponymous Stone Wētā, the Antarctic Lichen, the Fish-eating Spider.

This cool compendium of weird flora and fauna inhabit traits echoed in part by their human counterparts — replacing the usual character descriptions of names and appearance. Instead, we discover quirks such as how our scientists hide, how they defend, how they attack. Stylistically, at first it can make the novel feel abrupt and episodic. It’s best approached as interlinked short stories, with a powerful cumulative effect.

The scientists are all women — selected in part because women are less likely to be noticed, working quietly away from the spotlight on their male colleagues. They use stealth and subtlety in order to survive. Their reactions to danger tend towards the pragmatic: ‘It disturbed her that her most compelling argument against murder was a practical one,’ the Glass Sponge muses at one point. Significantly, several are women of colour, from places such as Timbuktu and Tuvalu, communities likely to be far more affected by climate change than others.

Despite the characters’ vastly different locales and / or backgrounds, there is a lack of distinction between their dialogue, and also an absence of character development. As a result, one scientist’s ultimate decision didn’t move me in the way it might have. It had all the poignancy of a colleague moving from one floor of an office to another.

These quibbles aside, I highly recommend this novel. Cade never lets her clearly considerable scientific knowledge overwhelm the story, and her writing style is energetic and engaging.

Despite the hunt-and-hide aspect which forms the main driving narrative, ultimately this is not a story about identifying and cornering the enemy. At its beating heart are climate-change scientists themselves, the Cassandras of our modern world, doomed to remain unheeded. The Antarctic Lichen agonises over a multitude of what ifs — what if they’d been better teachers, communicators, activists. Her conclusion is that it’s ‘our fault … We failed.’

Therein lies the strength of The Stone Wētā — it’s not a black-and-white tale of heroes and villains, rather one which examines how the global hierarchy and structures are failing us when it comes to saving our planet. It’s an excellent, timely read in our current climate where environmental protection is continually shunted aside in favour of politics, power, and greed.

Angelique Kasmara is a writer, editor, translator and reviewer from Auckland. Her novel Isobar Precinct, winner of the 2016 Sir James Wallace Prize for Creative Writing, and finalist for the 2019 Michael Gifkins Prize, will be published in 2020. Some of her work will be appearing in the upcoming anthology Ko Aotearoa Tātou | We Are New Zealand.