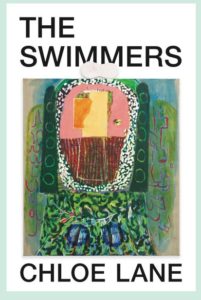 The Swimmers by Chloe Lane

The Swimmers
by Chloe Lane

This debut novel is a little strange, and strangely compelling. A young woman named Erin, hoping to get a ‘foot in the door with Auckland’s art scene’, leaves her ‘unoriginal thesis’ and drab internship in the city to make a sulky pilgrimage north. She’s in Kaipara to spend Queen’s Birthday Weekend with her extended family, though the family isn’t that extended: there’s her mother, who’s travelled up from Wellington, as spiky a character as Erin; hearty aunt Wynn, a nurse; quiet, Speight’s-drinking Uncle Cliff, the brother who stayed put; and Wynn’s ‘hippy chick’ teenage daughter Bethany.

This is Cold Comfort Farm, more comic than sinister, much of its acreage sold to an encroaching subdivision of ‘kitset houses’ to fund Moore sibling trips to the Gold Coast and a shining fridge that dispenses ice. Uncle Cliff sells his cabbages to a woman who makes expensive kimchi for holidaying Aucklanders. Auntie Wynn collects dolphin figurines. There are La-Z-Boys and electric heaters. ‘Simple farming folk,’ Erin insists, so at once, of course, we suspect complications and secrets.

The central complication, and the heart of the novel, is a topical one: Erin’s mother, tube-fed and speechless because of motor neurone disease, wants to die – right away. She has returned to the farm she couldn’t wait to leave as a teenager, surrendering herself to the care of her sister, and can only communicate through a thumbs up (or middle finger), or iPad messages, ‘woodpecking out each letter’. (The first Erin reads is: ‘SOS I CAN’T SPEND ANOTHER MOMENT WITH THESE FUCKING DOLPHINS’.)

Lane manages this storyline without sentimentality or moral hand-wringing, and for that reason the novel is often intensely moving. There’s a dark comedy to many of the preparations, Wynn handling the medical and legal logistics and a reluctant, distressed Erin commissioned with locating her mother’s idiosyncratic demands for music and flowers. The days pass too quickly. ‘I hadn’t really believed that she wanted me to do those things,’ Erin says, ‘or that I would need to do them’.

The women are the swimmers of the title – Erin’s mother and aunt were surf lifesavers, and competitive swimmers; Erin has won national titles and still swims most days, although she knows ‘the strength I felt in the pool had never really flowed over into other parts of my life.’ Although it’s June and rainy, the two sisters and their daughters have one last swim together in the freezing sea, an experience that’s both disappointing and transcendent, bringing them ‘somewhat together’. This is all that’s possible, the novel suggests, when death is about to fracture time.

The male characters in The Swimmers are sketchy, perhaps too broadly drawn, and too dodgy. Erin’s father ‘never lived with us’ and lurks outside the story, with his preferred wife, children and infinity pool. Erin’s internship and first curating gig – at ‘Mean Space’ – has been compromised by a storage-room affair with gallery director Karl, and nothing about him, the relationship or its ending (wife walks into storage room) feels more than a clichéd Girls subplot. The local man from whom Erin and Wynn must extort the required Nembutal can be threatened because of a past sexual transgression; so can bearded local dickhead Craig, with whom Erin has a squalid encounter. Only Uncle Cliff is a good sort, largely confined to his vegetable patch and sleep-out, seeing Craig off when he wants to ‘kick up a stink’ about something a reckless Erin has stolen from his kitset house.

There’s no cheap emotion in this novel, and Erin is genuine in her flaws – by turns contrary, sour, and distracted – and in the complexity of her grief. There’s a little of Eileen by Otessa Moshfegh in Erin’s anti-heroism and in the way the book’s events are relayed after the fact. But not much is done with this perspective of time: it breathes little air or insight into the spaces between the five days of the narrative. The Swimmers may end in the right place, but still it feels brisk, unfinished, or perhaps truncated, some of its story threads clipped too soon. It would have been stronger if the story was less contained, if more of its characters were permitted to be as interesting and difficult as Erin.

Paula Morris is a fiction writer and essayist. Shining Land: Looking for Robin Hyde, a collaboration with photographer Haru Sameshima, will be published in November by Massey University Press. She is also a co-editor of the forthcoming anthology Ko Aotearoa Tātou (Otago University Press).