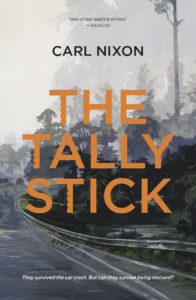 The Tally Stick by Carl Nixon

The Tally Stick
by Carl Nixon

‘The car containing the four sleeping children left the earth.’ That is a perfect opening sentence, conveying both mystery and dread, an almost fairy-tale dimension (dreaming children) existing alongside the brutal image of a serious car crash on a remote road on the West Coast of the South Island in the distant 1970s.

The five pages that follow are a heart-in-mouth account of what happens when a car slides off a wet road in the dark, and falls, slowly, into the river below. What would you say in those last moments, if you had time? ‘John wished there were time to apologise to his wife.’ Everything slows down. John doesn’t survive, nor does his wife, Julia, and nor does their baby, Emma. But the three older children, Maurice, Katherine and Tommy, all make it and scramble out of the car to safety. And then what?

The Chamberlain family had only just emigrated from England and were taking a South Island road trip before John was to start his new job in Wellington. No one knows where they are, and weeks pass before anyone realises they are lost. This is the 1970s, when it was still possible to go to the other side of the world and just disappear. Their sense of the New Zealand bush (they want to say forest) is as malevolent as it would have been for British immigrants arriving a century earlier. It’s primeval and impenetrable: ‘The forest here was vast and tangled. Trees, ferns, creepers and moss grew next to, on, over and through each other. It frightened her.’

The surviving children tell themselves there are no predatory mammals in these dark woods, but there is a kind of bird-man glimpsed at times. There are sandflies and there are eels that feast on dead bodies. After a few days, the children are rescued by a hunter and taken to a cottage, where a woman healer lives. Does that sound Grimm? There are further fairy-tale resonances, but Nixon, who always sticks close to realism, doesn’t push them too far.

You sometimes hear people say Nixon is overlooked as a contemporary New Zealand writer. I doubt that’s true: he wins prizes, he’s been picked to represent New Zealand in international markets and he sells books both here and overseas. But like Owen Marshall, and perhaps Maurice Gee, who are both obvious influences, he is occasionally written off as a regionalist concerned with his own fenced-off section of the country. That isn’t a strictly accurate description either, but it is fair to say that Nixon has never been fashionable. Yet he is an enormously competent, highly skilled and accessible writer who successfully straddles the gulf between literary and commercial worlds.

The Tally Stick​ (my only real complaint is with the ungainly title, which refers to an obscure object that barely features) is an efficient, gripping story, a Kiwi Gothic thriller that is confidently and economically told. It is probably his strongest novel. It would also make a hell of a movie, or better yet, a TV series. Nixon has things to say about adaptation and identity, about family and home, about colonialism and the new rituals and beliefs we might adopt or invent in a new land (the author has a religious studies qualification), but he lets these and other themes glide under the surface like one of his giant eels. The imagery of falling returns at the end, but there is a contrary movement, a floating above things, almost birdlike, which imparts a sense of hope and a belief in some kind of greater balance, just as Nixon balances his hard realism with a spiritual dimension.

Philip Matthews is a Christchurch journalist. He is writing a book about post-punk band The Birthday Party.