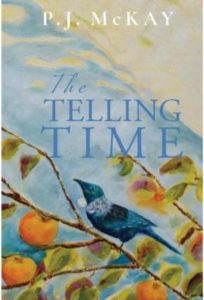 The Telling Time by P.J. McKay

The Telling Time
by P.J. McKay

P.J. McKay’s debut novel opens in 1958, in a sardine factory in Yugoslavia – a scene so confident and immersive that U.K. author Sebastian Faulks selected The Telling Time as the winner of this year’s international First Pages Prize.

Gabrijela is a young woman on the Adriatic island of Korcula. Much is idyllic there, like summer swimming in crystal water, picnics on the shore and exploring the caves and cliffs. But working for the family’s fishing business – and Tito’s economy – is not an easy environment for a girl who aspires to more than canning sardines and the long service of married life. ‘I peered in the mirror at my washed-out face and greasy hair. Life was so unfair … “What a toss-up – babies or sardines.” It was hard keeping the sarcasm from my voice but there was no point complaining.’

Gabrijela’s life changes forever when she is exiled to New Zealand, a country that looks ‘ironed out, flattened’, compared to her home in Korcula. She is given the ‘glimpse into another world’ she so desired, except this is not the world of her choosing. Gabrijela has been sent far away by her father, her airfare paid by an uncle with ‘Party connections’, so her secret can remain hidden and family pride is protected. This secret is revealed much later in the novel, withheld by Gabrijela’s first-person narrative.

The sudden transition from Korcula to New Zealand is a traumatic and unwanted upheaval (‘I was stuck here’) and Gabrijela struggles with the change in language, culture and landscape. ‘Was it the bright sunlight or had those flowers bloomed overnight?’ she wonders. ‘I had passed by so often and yet never noticed them before. Perhaps there was only so much newness a person could absorb.’

Gabrijela surfaces in an Auckland suburbia where you can set your watch by the postie, secured inside a tight-knit ‘Dally’ community where social life is Sunday mass and the Yugoslav Club Ball. She lives with family friends who immigrated to New Zealand in the 1920s and is sent to work as an underpaid housekeeper for their son, gruff Roko, whose marriage to a Kiwi woman has unravelled – no surprise to his tight-lipped mother Marta, whose own daughters were ‘hardly let out’ as teens.

Her new life offers unknown luxuries – like an electric stove – but familiar expectations. ‘I’d travelled half a world away,’ she realises, ‘and ended up with the same chores’. This is the late 50s, and her ambitions are expected to be confined to housekeeping. Gabrijela’s neighbour Joy has a washing machine instead of a heated copper, to Marta’s old-school disapproval. Gabrijela watches Joy ‘pegging up the last of her washing, tiny beneath her line laden with sheets and towels. The call of the cicadas now seemed like a congratulatory cheer. She must be cutting corners, I thought – her washing couldn’t possibly be as clean as mine.’ When Gabriejela hoists her clothes line, ‘Roko’s washing soared high like my own trophy.’

While Gabrijela warms to her new Auckland life – or perhaps slowly thaws – she’s not immune from hypocrisy and judgement about what’s uncovered of her past. ‘Surely I hadn’t come all this way,’ she thinks, ‘sacrificed so much, to end up with the same small-mindedness?’ Inequalities between the sexes are evident in the New World as well, most obvious when Roko is released from the ‘mistake’ of his first marriage. The Church ‘had wiped Roko’s slate clean, leaving me with no such reprieve,’ Gabrijela realises.

The Telling Time is a coming-of-age story not just for Gabrielja: her Auckland-born daughter, Luisa, is the subject of the novel’s other narrative line. Luisa sets off in 1989 for a backpacking OE, including a trip to the now-splintering Yugoslavia to play ‘mystery cousin’ – a reunion she’s keeping secret from her mother. Frustrated by the silence around her mother’s exile and the relatives she left behind, by the profound estrangement between past and present, Luisa is a ‘Croatian Kiwi’ who scoffed at the Dally Club activities of her youth but now ‘wants to live and breathe and see for herself’.

But Luisa’s travels to the land of her mother’s birth have unexpected and disastrous consequences: too late she realises ‘the rules are different here’. In a country still mourning Tito, and about to explode in sectarian violence, Luisa is a naïve New Zealander informed only by Dally Club conversations. ‘The politics at home seem like child’s play,’ she thinks. She and fellow backpacker Bex are exposed and unprotected in an environment where the women are expected to ‘look like nuns minus the headgear’. Aesthetically, the countryside of Macedonia feels as strange to Luisa as New Zealand did to her mother: ‘Yugoslavia must start somewhere up there but it’s nothing like the pictures she’s been carrying in her head.’

Luisa and Bex quickly realise that they are young women too far off track in an older, harsher world.At a night out with new ‘friends’ Nikola and Kosta at a bar in Bitola, they realise they’re the only women there aside from the bored middle-aged woman serving drinks. The suggestion that Nikola’s sisters might enjoy going there is met with incredulity. ‘For me they are best at home,’ Kosta says. ‘It would make problems.’ Life, he tells Luisa and Bex, ‘is different in your country. You are different.’ These attitudes have brutal and devastating consequences for Luisa. The vulnerabilities of being a woman lie at the core of the secrets both Gabrijela and Luisa end up carrying.

McKay’s debut explores two different eras and communities in unsentimental detail, its research spanning generations and time zones. The races in late 50s Auckland are as vivid as a Communist Party Ball in Dubrovnik, or a rowdy bar in 80s Macedonia. I find it reminiscent of Maxine Hong Kingston’s classic The Women Warrior: daughters set out on a discovery of cultural heritage, intending to understand their mothers, and therefore themselves. The dynamics of our closest blood-ties are often the most complicated, after all.

This is McKay’s debut, begun during the Master of Creative Writing programme at the University of Auckland in 2017, where two other recent debut novelists, Amy McDaid and Rose Carlyle, were her classmates. The Telling Time is vivid and transporting, visually rich, and I can forgive a couple of clumsy metaphors, and a pounding heart too many. Both Gabrijela and Luisa are engaging, complex characters, although I was drawn more to Gabrijela’s story and the restraints imposed on her by patriarchal dominance and traditional Croatian culture.

‘Polako, polako’ becomes Gabrijela’s mantra: it means one step in front of the other. McKay’s two storylines explore old paths and unravel the secrets of two generations. It’s not until Luisa reaches the island of Korcula that she can realise the extent of her mother’s disconnection in New Zealand, and the reasons for her estrangement with her family. In this ‘lost’ home, Luisa and Gabrijela find a way to reconcile with the past and with each other.

Rosetta Allan is the author of two bestselling historical novels, Purgatory and The Unreliable People. She lives in Auckland.