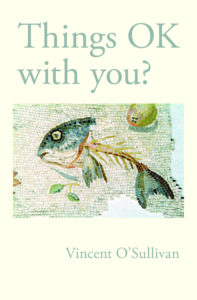 Things OK with you? by Vincent O’Sullivan

Things OK with you?
by Vincent O’Sullivan

When someone’s been writing as long as Vincent O’Sullivan has, it’s hard to imagine they’re anything but certain of the value of their craft. O’Sullivan’s first book of poetry, Our Burning Time, was published in 1965, and since then he’s written almost twenty more collections, along with novels and plays and books of nonfiction. I suppose I imagined that, at this point in his career, he’d managed to finally convince himself of the purpose, the nobility, even, of poetry. Fortunately for his readers, he appears neither convinced of nor concerned with those things.

Indeed, many of the poems in O’Sullivan’s latest collection, Things OK with you?, linger a while on the slight nonsense of poetry itself. More accurately, the nonsense is not inherently in poetry, but in the presumption that a poem can govern, or order, or illuminate anything it captures. ‘As if the moon so far as a poem goes gives a damn,’ O’Sullivan writes, and just across the page, in ‘Riverrun’, he reminds us: ‘your presence is beside the point.’ Apparently, making a life as a poet means coming to terms with the arbitrariness of one’s work in the grand scheme of the world — or, in the grand scheme of the moon — and yet persisting, gently.

This wariness of the overtly performed poetic is woven through the collection. O’Sullivan reminds his reader that the world, particularly the natural world, is bigger than any poem that might come of it. In ‘What to look sets off’, though the scorned ‘metaphorically incontinent’ might compose some grand figurative comment on the fireflies: ‘You are not walking among tiny express trains […]. ‘These are fireflies’, the total statement.’ And in ‘Soon enough, then’, the trees around the speaker are convinced of their simple existence as poetry enough: ‘This is the story, the one you stand in’. O’Sullivan records natural details with care, and does not resist the urge to personify the fireflies or the trees or the moon; yet he conscientiously avoids the urge to bend this kingdom of the organic towards any obvious higher purpose. This, it seems, would be hubristic.

Instead, what’s wrestled into language is the action of remembering. ‘Class outing, even now’, as its title suggests, describes a Fourth Form field trip to see The Merchant of Venice through the distillation of a single line, ‘A wilderness of monkeys’; how this line took over the whole play for the girl of the poem; how this line unveiled ‘language’s greeny net’ for her. Similarly in ‘What river means’, a poem that begins ‘Never mind as old as she is or whenever’, a woman becomes a girl again, remembering the way she used to watch and puzzle over the river: ‘how it’s always wanting, / the river, to be the river miles ahead’. These memories, and more throughout the collection, exist solidly no matter how long ago they were created. The memory of naming a thing, names that thing forever.

At the midpoint of Things OK with you?, O’Sullivan makes his reluctance toward the swooping, extravagant metaphor clearly known with a forthright treatise against autobiography titled ‘The spook at life writing’:
.

I dislike biography – one’s own, that is –
fairly much as I imagine the beans my wife’s
planted in the garden behind the shed
would be the first to acknowledge the bamboo
pole is what guides them through to Xmas,
but even so, bugger that –

Yet even these strophes of almost transparent language are complicated by O’Sullivan’s quick self-corrections and syntactical swerving. The self-conscious speaker in many of these poems tends to deflect a reader’s desire to understand exactly any outright statement. Instead, we have to settle for inhabiting, rhythmically and structurally, the speaker’s restless uncertainty.

Each poem has its own slant, even when it’s composed of bouncy rhyming quatrains. These more formally restricted poems are sometimes sharp, wicked, fresh; sometimes less so. ‘Ms Dickinson, Mr Whitman’ mimics the rhythm and often-slanted rhyme of Dickinson’s verse to compare these poets’ differing fixations, and while it’s a neat poem, it seems a little too plodding, too laboured, as soon as the reader reaches the facing page and experiences, in one glance, the perfection of ‘Spot on’:

The rigmarole of to get there,
to things as they are.

The horde of ‘begats’ in the Bible
leading up to ‘Voila!’

The amount of dark required
to say ‘morning star’.

In each good collection of poetry there is, I think, at least one poem that distills the collection in only its brief few lines. ‘Spot on’ is that poem of this collection, and seems also to be one version of O’Sullivan’s ars poetica. His speakers are all, knowingly, saying a lot of different stuff, performing a lot of language, in an effort to reach the one vital thing — the ‘voila’, the ‘morning star’, the abstract yet somehow precise ‘things as they are’. And in this poem, each naming of this thing resonates with the others in a perfectly balanced chord.

Things OK with you? offers stubbornness, beauty, shrugging, and deep satisfaction, but I think its soft-spoken tenderness is its most generous gift. You can tell this even from the book’s title, which is also — can you spoil poetry? I guess not — the last line of its last poem. It’s a book that invites a ‘you’ in. A you, a me, an imagined friend. Yes, there are jokes both on-the-nose and subtle, puns and rhymes, bounciness and irony. But the moments of sincerity are stunning, as in that last poem’s title and first line: ‘Since you kindly enquire, in the elevator, yes / I’ve had a good life’.

O’Sullivan is a poet willing to admit that poetry neither makes one wise, nor especially improves, well, anything. It’s through that admission that each of these poems is free to sing.

Sophie van Waardenberg is studying towards an MFA in poetry at Syracuse University in upstate New York, where she serves as co-editor-in-chief of  Salt Hill Journal. Her first chapbook-length collection of poems was published in AUP New Poets 5.