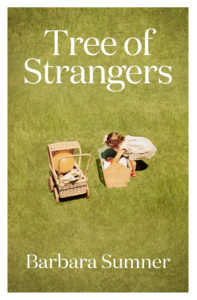 Tree of Strangers by Barbara Sumner

Tree of Strangers
by Barbara Sumner

This beautifully presented memoir is sad. Defiantly, powerfully, intelligently, cripplingly sad. While there is redemption of a sort, there are no winners. For Barbara Sumner, when a baby is given up for adoption, as she herself was in 1960, there can be no winners. Adopted people, she writes, ‘come from nowhere. You are strange fruit of obscure origin. The lack of a bloodline marks you.’

Like many Pākehā born in that era, I’ve got numerous connections to adoption. One is the wistful girl in my Primer 4 class who said she was special because she was chosen. (The underlying message in that comment deeply unsettled me; I can still remember she had ballet shoes and elocution.) I remember my best friend throwing up on the Cook Strait ferry: we were about to start our post-graduate year at training college. A week later, she was on her way home; five months later, she stayed up north for a while. Then there was a member of our extended family finding out at 20 that she had an older brother. Friends who’ve adopted children. My mother-in-law’s cousin Thelma, Major Smith of the Salvation Army, who, like the callous dragon in charge of Sumner’s mother’s pregnancy, worked at (a different) Bethany, delivering thousands of babies. She is remembered still for her pragmatic kindness, and was foremost among those who fought for what was then known as the solo mothers’ benefit: she’d seen too many babies taken from their mothers.

There is no attempt in Tree of Strangers at an even-handed approach, and that is one of its many strengths. Sumner is a filmmaker: her unforgettable 2009 documentary This Way of Life was shortlisted for an Oscar, and rightly won bucketloads of awards round the world. She brings her tough, yet sensitive eye to this tight, visual book. The story of her life as an adopted child rolls out with huge poignancy, while avoiding the slightest hint of ‘poor me.’

An intelligent, tenacious child, by her early 20s Sumner has three children of her own and is unhappily married. Her three little girls are the first people she has known who share her genes. But she wants to look behind herself, as well as in front. She becomes obsessed with finding the identities of her parents, her real family tree. ‘I’ve altered my name seven times,’ she writes. ‘I used to change everything with regularity. Glasses, hairstyles, furniture, lovers, husbands and friends – everything was movable … It was not so much that I’d lost my identity, but that I’d never had one.’

Sumner takes us through her mission, as she starts to meet people who had known her mother and who can say how much she resembles her. A number of compassionate women help her with her life and with her quest. For her it’s ‘like assembling a jigsaw puzzle that’s lost its box … with no image to consult you may never know what pieces are missing’. Memory, that unreliable, duplicitous thing, is crucial throughout the telling of the story. Her search for her father is confounded by inaccurate memories, and her mother herself is unsure about it, choosing one of two possibilities when she passes on his name to a friend. Sumner’s flashbacks include people she hasn’t met and places she hasn’t been. I’m a cynic by nature, but I’m comfortable with the concept of genetic memory. And Sumner’s sense of imagery, her ability to find the pertinent metaphor, the sheer, low-level rage which colours this book, all make it hard to put down.

‘Where am I from?’ is a common question for Pākehā these days. Reality television explores stories of roots and reconciliation, from Who Do You Think You Are? to New Zealand’s own Reunited. In these programmes there’s usually a search, and then a happy ending. The camera pulls away from a tear-jerking hug. DNA tests are popular, although they may well show you that Dad actually isn’t Dad, as one of the sad twists in Sumner’s memoir reveals.

It’s only recently that adoptions have been ‘open’ (though Sumner describes this as a ‘misnomer’ and ‘in essence, an exercise in rebranding’). For whatever reason – and they were various – it was considered best for all concerned if the baby’s new family became its only family. When Sumner shares information about her mother with Max and Mavis, the parents who adopted her, they’re hurt and angry. ‘Deep in the heart of stranger adoption is an unspoken contract,’ she realises. ‘You cannot be both the cure for infertility and someone else’s child at the same time.’

The search for a lost mother takes an unbelievably tragic turn, and they never meet. Sumner does find and meet half-siblings, and at last feels ‘placed within the sweep of history’, with a past that ‘lights my future’. But by the end of this memoir, which I read with indecent haste, my heart was breaking for so many people. Mavis and Max adopted Barbara with complex but naively decent intentions: they wanted to care for her, and in so doing, fill a hole in their own hearts. But she was never theirs, and this was insurmountable. I also felt defensive, protective of good kind friends of mine who have adopted children, and who have unbreakable bonds with those children. I felt a sudden profound yearning for my own dead mother, for my own lost baby. But like an arrow that finds its mark, this book directs us and our hearts to Barbara, who has told her own visceral story so clearly, so visually, so compellingly. What about the child? – what about this child? – is the question at the heart of this brilliant book.

Linda Burgess lives in Wellington. She is the writer of 8 books – fiction and non-fiction – the most recent being her collection of personal essays, Someone’s Wife. She writes a monthly column for The Spinoff, and regularly reviews television for Radio NZ’s Afternoon programme.