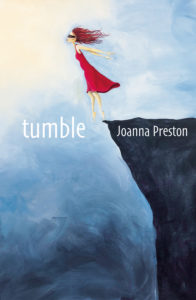 Tumble, Canterbury-based Joanna Preston’s second collection, was the poetry winner at last week’s Ockham New Zealand Book Awards. Joanna Preston’s poetry is anchored in the plot and texture of ancient and medieval myth and story, and here, these elements weave into the events and language of more recent histories. The collection’s poems navigate the death of Aeschylus, a journey to the underworld and Viking raids, as well as the 2011 Christchurch earthquakes and the public persona of Margaret Thatcher. The collection doesn’t meander as much as it flits, making quick hops between countries and eras, childhood and adulthood, and into and out of voices comedic and tragic, calm and tumultuous.

While Tumble’s many retellings have moments of bite, the poems sometimes fail to measure up to the richness of their primary texts, and a few of them do not quite overcome the staleness of a received story. The sparseness of ‘A bird in the hand’ — ‘She opened for him / the flesh // of a pomegranate, told him to sip, taste, / take.’ — is slackened by the somewhat unsurprising rhythms split between short lines.

Still, there are some moments of ruthlessness and breathlessness that might overshadow those shortcomings. The final strophes of ‘Chronicle of the year 793’, in which the sound of a Viking arrival on Lindisfarne is mistaken for a flock of birds, stand out:

So many birds! Yet afterwards

not one feather was found

how their wingbeats sound

The echoed exclamations take on the voice of an unknowing listener, a body caught in the trap the reader has already processed. Preston exits the poem with portents unfolding and a great tragedy still to occur, and this moment of pathos is, in consequence, elevated and torqued and immediate despite the story’s long temporal and special distance from its reader.

At many points in this collection, the natural world is given agency; in ‘Classical Gas’, ‘The hydrangeas / reached out and caught me’; in ‘The cold, darkening’, flocks of starlings ‘anchor night / with their feet’. Even the lifeless remains of creatures have power, as in ‘Criccieth’: ‘the bleached hide and scattered bones / of a long-dead sheep / warned against straying’. This poet is not merely fond of nature’s beauty and does not only use it as decoration — these flowers and birds and remains change and order the world around her, and she is in constant conversation with them.

Tumble, unsurprisingly, has movement at its heart. Many of the poems pivot on moments of physical tumult, as in ‘Lost’, in which the speaker’s spouse has gone missing in the mountains:

The stone weight of cold

punched the windows in

and swept you off the road –

streaming past with a roar that I

was drowning in and nothing any

where for me to cling

Preston’s short line enacts the shock of the ‘sweeping’ and ‘streaming’, and allows this poem to tumble its reader through a real-time near-tragedy. This poet’s craft becomes similarly concentrated and immersive in ‘Atalanta’, a poem tied to the world of ancient mythology, like others here, but building so much strongly verbed momentum that, in its final lines, the titular girl can break out of the already told story:

But for now she is running. The tingle

as though she could outrun her life.

When Preston ends a poem right at the threshold of danger or hope, a reader feels real tremors of energy.

Preston’s strengths in craft and story marry her skill for tonal acrobatics in one of Tumble’s longest poems, a chronicle needing not much more explanation than its title gives: ‘Lucifer in Las Vegas’. The tumble here is, of course, this devil’s fall from heaven, and his time in Las Vegas is punctuated by deft and pleasing one-liners and poetic sleights of hand. And its rhythm punches the dark comedy home:

It’s a conceit that could easily be kitsch, hollow, or monotonous — or all three — but Preston avoids that with her five-part structure that winds from Lucifer’s fall to his gambling empire rising from the desert, ending with bitter desperation:

At night, look down

from space and Vegas is

the brightest thing on this world.

Look down, damn you, and see.

Preston wears the voice masterfully; the poem is among her best here, and makes even more sense alongside the book’s epigraph, a quote from Terry Pratchett: ‘All tribal myths are true, for a given value of “true”.’ The bombastic and subversive elements of Pratchett’s Discworld novels and his collaboration with Neil Gaiman on Good Omens can serve as another tonal layer, an additional sounding board for a reader throughout this collection.

Tumble often bears the airiness of a soft-spoken speaker, the dust and familiarity of fable, and the charm of natural beauty. But it’s a collection shot through with fleeting moments of bitterness, fear, irony and anger, and it’s at this intersection of the lovely and the dangerous that Preston’s poetic craft and ambition is at its height.

Sophie van Waardenberg is a recent graduate of Syracuse University’s MFA in Creative Writing, during which she served as co-editor-in-chief of Salt Hill Journal. Her first chapbook-length collection of poems was published in  AUP New Poets 5.