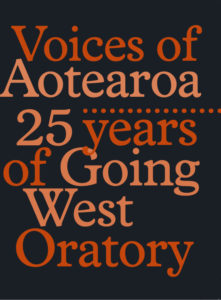 Voices of Aotearoa: 25 Years of Going West Oratory by The Going West Trust

Voices of Aotearoa: 25 Years of Going West Oratory
by The Going West Trust

I’ve only been to the Going West festival once, and that was back in 2019, when Paul Horan and I took our comedy book, Funny As, on the road to Titirangi and spent an enormously enjoyable hour on stage with comedian Michele A’Court. We loved it; I hope that one or two people in the audience got something from it as well.

Two years seems like a millennium ago in a time of Covid-19, when festivals are threatened and getting together in groups has been either a luxury or a health risk. I remember that the Going West mood was relaxed and open, without the intensity, pressure, crowds and commercialism of the Auckland Writers Festival. We were half in the city, half in the forest. Roosters in the carpark were audible in the hall, but otherwise it was quiet. There was a communal lunch, which I think was vegetarian, and instant coffee. There was a very cool Witi Ihimaera session that had a soundtrack. It was a good time.

From Hokianga to Wanaka, Tauranga to Invercargill, there is hardly a town or city in New Zealand that hasn’t developed some kind of writers festival. Yet Going West stands out, not only for its vibe, and its longevity (it was founded in 1996), but also because it comes with a story, or perhaps a creation myth. It sprang from a big idea. Like Klaus Kinski in Fitzcarraldo, who longed to see an opera in the jungle, Murray Gray had a vision of Maurice Gee reading from Going West on a train to the west, and he wouldn’t rest until it became real. The visionary spirit of former Waitakere Mayor Bob Harvey is in the festival’s DNA too.

Twenty five years later, in the absence of in-person events, the festival team has packaged its opening night speeches into a substantial book that is both a historical record and a souvenir. Of course the speeches were written to be heard not read, and they can indeed be heard at the festival’s website. But the book, as an object, is still valuable as an artefact of a community created by literature, or dreamed up by a shared idea of literature, and what it can and should do.

In her 2015 oration, titled ‘Holding the Line’, novelist Stephanie Johnson talks about writers festivals as a kind of commons, ‘a place where people can come together to encounter new ideas and ways of thinking; a place where revolutions, big and small, can be fomented’. That feels true. At their best, as at Christchurch’s Word over the past decade, they can almost seem like autonomous zones.

Ideas about communities created by writing are a common theme in these 23 keynote speeches, plus the bonus insertion of Allen Curnow’s ‘Landfall in Unknown Seas’. Sometimes the speeches can be self-regarding and self-indulgent, and as they are written to be heard not read, they are mostly chattier and more anecdotal than if they were essays written for print.

Topicality is rare, which is probably a good thing. Ian Wedde’s jocular piece, ‘The Nation’s Narrative’, is very much of its time (1998) in its musings on TV advertising and national identity. Michael King pays attention to the horrors of September 11 before launching into his wonderful piece on family history, ‘Never Lost for Words’ (2001). The literary community’s loathing of John Key is evoked by Johnson in 2015 through her impersonation of fictional National Party Poet Amanda Tauiwi Reinhardt Carlton. The performance even involved a wig.

One complaint before we get to the good stuff, and that is about the titles, which are largely banal and generic. ‘Never Lost for Words’, ‘Getting a Word In’, ‘Fit to Print’, ‘Word of Mouth’, ‘Holding the Line’, ‘Between the Lines’, ‘Spread the Word’: these are almost interchangeable from one speech to the next, but I suppose they have the advantage of letting the invited speaker take the topic in any direction they like.

There are many highlights and what follows is only a sample. Nigel Cox (2005) has very witty things to say about returning to New Zealand from Berlin and being struck by the casualness of everything here. The Māori guy at Immigration says to him, ‘Great to have you back fella. Welcome home.’ He sees grown men wearing shorts and T-shirts in a Wellington southerly. But he has complaints about New Zealand too: the public transport, the obsession with violent crime and the state of the media, especially the shortage of books pages. You can imagine the Going West crowd nodding in agreement at that last one.

Ecologist and writer Geoff Park (2003) was a prescient thinker about the New Zealand natural world and its representation, and we could use some of his wisdom now: ‘The evolution of modern New Zealand culture from its colonial beginnings has been paralleled by nature’s relentless vanishing from sight and mind. And as we have become a culture poor in people who have been able to read country and feel it, we have been losing our capacity to know the life forces that sustain nature and to intuit with them. Yet no piece of New Zealand has been colonised so long that its native spirit is a reality no more.’ How apt to have heard that on the border between the sprawling suburban edge of Auckland and the very green Waitakeres.

Park and Cox are no longer with us. Nor are King, Peter Wells, Maurice Shadbolt and Christine Cole Catley, whose 2004 piece was a tribute to King, who was ‘in love with life, in love with this country, courageous, laughing’. Nor is photographer Marti Friedlander who breezed in and bossed writers around, as Going West chair Naomi McCleary puts it.

Charlotte Grimshaw’s 2013 piece, ‘In Conversation on Conversation’ is another highlight, and it’s fascinating to see her work through some of her ongoing interests in this forum. Surveillance is one of them, in the wake of Edward Snowden’s whistleblowing, as is the anti-intellectual culture in New Zealand politics. She makes some of the same points Cox and Johnson make, but in a more rigorous and sustained way, and one has to admire the bravery of her saying that she sees an analogue of the relationship between her fictional doctor Simon Lampton and her fictional prime minister David Hallwright in the relationship between Nazi architect Albert Speer and Adolf Hitler.

How are otherwise intelligent people so easily seduced by the powerful, she asks. Why does our conscience fail us? What should artists do? It’s very easy to see how this speech set the scene for the radical self-examination that led to this year’s sensation, The Mirror Book.

Philip Matthews is a Christchurch journalist. He co-wrote Funny As: The Story of New Zealand Comedy(Auckland University Press, 2019), which was longlisted in the 2020 Ockham New Zealand Book Awards.