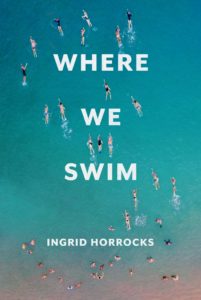 Where We Swim by Ingrid Horrocks

Where We Swim
By Ingrid Horrocks

Despite the title — and the fan of ocean swimmers spreading up the cover photograph — there is not a lot of swimming going on in this book. By the time we have reached the halfway point there has been an inadvisable crossing of a polluted river mouth in Taranaki as part of an abandoned plan to swim between Wellington and Auckland. There’s been a splash around in an apartment complex pool in Medellin, Colombia; a nervous slide into a cordoned offshoot of the Amazon River; a hotel pool in Phoenix and another, embedded in the basalt cliff face, in the experimental metropolis Arcosanti in the Arizona desert.

The author, we are told, doubts she could even meet the common definition of being able to swim (200 metres of freestyle in a pool): ‘I was that kid at the back of the race who was more drowning than swimming.’ So, no overarm tips, no diving techniques, no ready-set-go sense of leaving point A to splash and kick to point B. Unlike Swim: a year of swimming outdoors in New Zealand by Kiwi conservationist Annette Lees (2018), Horrocks does not talk to other outdoor swimming devotees, nor does she expound on the health benefits of a daily dip.

Rather, as she notes near the end, this is a book of ‘strange swimming explorations’, a series of autobiographical musings pulling together stories of family, childhood, travel, academia and environmental degradation. The suck and surge of the tide, the tumble of waves, the chill of a winter dip, the unvarying blueness of an urban swimming pool — these moments of pause and surrender become the launching pad for these speculations, when ‘anxiety and chatter’ momentarily drop away, when the busyness of life as mother, partner, daughter and academic gives way to reflection and speculation.

These moments of calm are necessary. Where We Swim is an anxious book. There is personal anxiety about the health of her father and mother-in-law. There’s cultural anxiety about writing about place, this place, as a Pākehā writer; about slum tourism; and about the Eremocene, the age of loneliness, a term coined by E.O. Wilson to describe the existential isolation that comes from extinguishing other forms of life on Earth. There’s environmental anxiety about ecological degradation and inevitable sea level rise; and there’s physical anxiety — about jaw-snapping caimans and the lack of life jackets on the boat charging up the Amazon.

The sea, the swim, the watery edges of these and other islands prove to be rafts of equilibrium. She aligns these experiences with those of the seventeenth and eighteenth century British women travellers, the subject of her 2017 book Women Wanderers and the Writing of Mobility, 1784-1814. She explains their ‘wandering texts’ — narratives and verse with no clear paths forward but framed and bound by their experiences on the coast or in the surf. Returning to the shingly coast of Surrey, she describes English novelist Frances Burney negotiating a newfangled bathing machine, Romantic poet Charlotte Smith watching sea battles between Britain and France from the shore, and Mary Wollstonecraft braving Norway’s rocky coastline.

‘If “where we swim” is metaphorical,’ she writes, ‘then Charlotte Smith, Frances Burney, and also Mary Wollstonecraft, who felt perpetually unhoused and wrote so often about water, were some of the company I swum with.’

Like the ‘wandering texts’ of these writers, Where We Swim is digressive, provocative and strangely compelling. Like a beachcomber picking up unusual shells, she pauses to consider the bell-makers of Arcosanti, song fragments passed between humpback whales, the oral histories describing Wadjemup (Rottnest Island) as part of the mainland during the last ice age: ‘In what moment did the stories declare it an island, I wondered, and when did the walk become an impossible swim?’

She holds on to those moments when we are drawn collectively to the ocean and its inhabitants:  Wellington’s decision to change its Matariki celebrations after a whale is spotted in the Harbour, the rescue of the young boys trapped in a cave in Thailand in 2018, the kite surfers on Lyall Bay, ‘sails leaping across the bay like dolphins’, the gentle exhalation of a humpback whale with her calf, the familial tug of childhood summers by the sea and, running through the book like a warm ocean current, her twin daughters, Lena and Natasha, hands busy with sand or stones, slippery and seal-like in the waves.

In the last two chapters we are back on Horrocks’ home turf — Wellington’s south coast, a place of rocks and shingle and pounding breakers, the persistent insinuation ‘of a tug from the depths’. The descriptions are bracing, evocative, but still mysterious, answering the where of the title but not the why. Then a solitary night swim in Wellington — cool sand, dark water, the ‘almost-breath’ of the waves that tell her she is home, her children are safe.