Below is an excerpt from the novel Pearly Gates by Owen Marshall, which is shortlisted for this year’s Jann Medlicott Acorn Prize for Fiction at the Ockham New Zealand Book Awards.

Owen Marshall described by Vincent O’Sullivan as ‘New Zealand’s best prose writer’, is an award-winning novelist, short story writer, poet and anthologist, who has written or edited 30 books, including the bestselling novel The Larnachs. Numerous awards for his fiction include the New Zealand Literary Fund Scholarship in Letters, fellowships at Otago and Canterbury universities, and the Katherine Mansfield Memorial Fellowship in Menton, France. In 2000 he became an Officer of the New Zealand Order of Merit (ONZM) for services to literature; in 2012 was made a Companion of the New Zealand Order of Merit (CNZM) and in 2013 received the Prime Minister’s Award for Literary Achievement in Fiction. In 2000 his novel Harlequin Rex won the Montana New Zealand Book Awards Deutz Medal for Fiction. Many of his other books have been shortlisted for major awards, and his work has been extensively anthologised.

This entertaining and insightful novel both skewers and celebrates small-town New Zealand.

Pat `Pearly’ Gates has achieved a lot in his life and evinces considerable satisfaction in his achievements. He has a reputation as a former Otago rugby player and believes he would have been an All Black but for sporting injuries. He runs a successful real-estate agency in a provincial South Island town, of which he is the second-term mayor. Popular, happily married, well established, he cuts an impressive figure, especially in his own eyes.

But will his pride and complacency come before a fall? 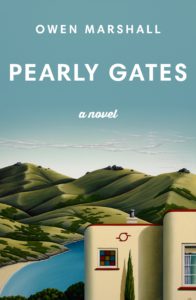 ‘You have to let him be different,’ said Helen.