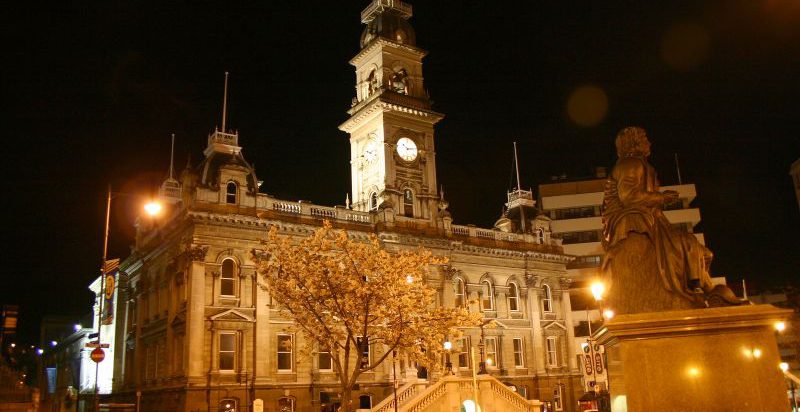 Philip Matthews explores the glorious past and isolated present of Dunedin, now a UNESCO City of Literature.

If you are driving in the South Island, everything changes as soon as you cross the Waitaki River, the natural border between Canterbury and Otago. You notice the geography first, the shift from Canterbury’s flat, tamed plains to the wild and unruly landscape of Otago. The land feels darker and more dramatic, and drivers who have been dozing through Canterbury need to have their wits about them.

Time seems to change as well. You hit Oamaru first and then Dunedin – two once-grand commercial cities that have been in decline for more than a century. They feel isolated and the winters are longer down there, the skies are a deeper grey. But there is romanticism in that feeling of decline. In Dunedin especially, history is still very present. Everyone knows the early stories. Those who grow up there or adopt it are proud of its roots and traditions.

Whenever you talk about literature in Dunedin, you talk about Charles Brasch. When I asked poet David Howard if Dunedin deserves its status as one of 20 worldwide UNESCO Cities of Literature, he said: ‘I think in terms of New Zealand, yes. It’s because of Charles Brasch, really.’

An intellectual poet in his late fifties, Howard grew up in Christchurch but has spent the past 13 years living at Purakaunui outside Dunedin. He is well placed to consider the follow-up question.  Given the importance of Ursula Bethell, Denis Glover, Allen Curnow and the Caxton Press, couldn’t the case also be made for Christchurch? In fact, it has just been made by Peter Simpson, in his book Bloomsbury South: The Arts in Christchurch 1933-1953.

‘You can argue that,’ Howard agrees. Glover was ‘a nexus’ and Caxton Press was seminal, and yet. ‘Dunedin is a smaller town. Possibly the cultural legacy is more obvious. Dunedin only has 123,000 people. A quarter of the population are students. They are the life of the city. Once they go home, the stadium’s empty and the test match is finished. We just pick up the rubbish.’

The relative heft of Otago University – it’s usually considered New Zealand’s second-best university, behind Auckland – and the disproportionate student numbers were a selling point when a group of four from Dunedin pushed for the city to become an official City of Literature. The promotional material mentions ‘the quality of education and the vibrant cultural life of the city’ and draws a link with former Prime Minister Helen Clark’s championing of a creative economy. Many declining manufacturing and commercial cities are trying to reinvent themselves as cultural capitals. Dunedin got there early, almost by accident. Again, it goes back to Charles Brasch, who sits at the centre of the Dunedin story. As the well-educated son of a wealthy family, he is emblematic of the commercial power Dunedin had in the 19th century, when it was briefly New Zealand’s richest and most important city, as well as the philanthropic cultural traditions that are still strong within the so-called ‘Tartan Mafia’.  Brasch is famous for founding Landfall in 1947 and establishing the Robert Burns Fellowship at Otago University 11 years later. Still New Zealand’s most important literary journal, Landfall remains based in Dunedin and, after a long period of short-term or guest editors, it’s been steered for the past six years by poet David Eggleton, a transplanted Aucklander.

In an interview with Fairfax Media last year, Eggleton explained that if you come from the North Island, Dunedin’s darkness and insularity takes some getting used to. ‘When I first shifted here, the city struck me as a miserabilist’s paradise run by the Brothers Grimm – which is probably why the alternative music scene was so vibrant. Since then, gentrification has set in, both of myself and the city. So now I think my poetry’s more mellow, less frenetic. And I’ve grown to appreciate Otago’s many subtle shades of colour.’ Eggleton is a former Burns Fellow as is another Dunedin writer, Philip Temple, who claims that the Burns is different to residencies offered by other New Zealand universities.

‘It is the only one that is actually secure because it’s an endowment,’ Temple argues. ‘The university couldn’t do anything about it even if it wanted to, without an act of Parliament, whereas the other ones are subjects to the whims of current university administration and Creative New Zealand. It’s also the richest by far because a writer gets the equivalent of a lecturer’s salary.’

A celebrated novelist and non-fiction writer who is now working on a major biography of writer Maurice Shadbolt, Temple sees that the Burns Fellowship regularly provides the city with an infusion of new writers.

‘There is quite a large community of writers down here, especially for the size of the city,’ Temple says. ‘What has tended to happen is that Burns Fellows often stay here.’ That happened to him, in a roundabout way. He had the residency in 1980 and came back for good 10 years later.

‘The educational, cultural, literary ambience of the city is strong. It goes way back with the Scottish educational heritage and the foundation of the university. It’s the only real university town in the country. It really does strongly influence the character of the place. It’s always been a fairly cheap place to live.’

Temple admits that when he moved to Dunedin in 1990, ‘it had an atmosphere of a city that had been great and had gone into decline and stagnated’. But like Eggleton, he sees that it has picked up over the past five or six years. As well as the UNESCO honour in 2014, there has been the renewal of the Dunedin Writers and Readers Festival, an increase in visual arts activity and bold street art around the increasingly gentrifying Vogel St area. Temple is even enthusiastic about the controversial Forsyth Barr Stadium that was opposed by many Dunedin ratepayers.

Along with his wife Diane Brown, a transplanted Auckland writer who runs Creative Writing Dunedin, Temple now feels deeply embedded in the city’s literary culture. He is happy to act as an ambassador and the couple will use a German holiday in September to call in at Heidelberg, another of the UNESCO Cities of Literature. The UNESCO scheme is akin to a sister cities programme in which geographically diverse centres communicate with each other and develop links and networks. Temple and Brown will present a session on Dunedin and its writers within Heidelberg’s autumn literary festival.

The UNESCO push started in 2010, inspired by Edinburgh’s example as the first City of Literature. Dunedin won its status in December 2014 but it took the Dunedin City Council longer to figure out how to run it. In May 2016, the council appointed Nicky Page as director. Born and raised in Dunedin and with a background in publishing, she reports to Bernie Hawke, the council’s Group Manager of Arts and Culture and one of the four who launched the UNESCO bid. The others were design lecturer Noel Waite, writer Annie Villiers and the council’s Marketing and Design Team Leader Liz Knowles, who became the ‘bid co-ordinator’.

Page believes her role is about communications and connecting people and she hot-desks around the city, doing two days a week in the Dunedin Fringe Festival office, two days in the University Book Shop and one day in the Dunedin City Library. The first two institutions donated their space which, she says, reflects the strong collaborative atmosphere in the city – the University Book Shop is also launching a writers’ residency with the Robert Lord Writers’ Cottage Trust, understood to be the first bookshop residency in New Zealand. ‘There is a lovely networking across the streams of arts in Dunedin,’ Page says. ‘It makes for an exciting cross-pollination.’ The supporting documents that the Dunedin four provided to UNESCO have been turned into an impressively-designed 58-page promotional booklet that describes the city’s cultural past and present, and is reproduced at the website. Besides the legendary influence of Brasch and the all-pervading university, there are many other names and highlights. Wordstruck!, which preceded the Dunedin Writers and Readers Festival, was said to be New Zealand’s first writers’ week. The New Zealand Young Writers’ Festival, which launched in 2015, is probably the country’s newest.

The history of Dunedin writers stretches back to early newspaper editor Benjamin Farjeon, who wrote plays and novels during his time in Otago in the 1860s. Other writers claimed by the city since include Janet Frame, James K Baxter, Brian Turner, Cilla McQueen, Hone Tuwhare, Barbara Else, Chris Else and Neville Peat. Dunedin has been a setting for fiction by Dan Davin, Eleanor Catton and Duncan Sarkies. There is a new wave of Dunedin crime fiction, driven by Vanda Symon, Paddy Richardson, Rogelio Guedea and Liam McIlvanney. Guedea, who is Mexican, and McIlvanney, who is Scottish, show the continuing importance of Otago University as a magnet for international writers. Due respect is paid to publishing history, particularly AH and AW Reed, John McIndoe Publishers and Longacre Press, and present-day publishers Otago University Press. The UNESCO material broadens the definition of literature to include the explosion of literate alternative music – the so-called ‘Dunedin Sound’ – in the 1980s.

For David Howard, the City of Literature status can also provide Dunedin with some other, contemporary meanings. As an advocate of South Island writing, he sees that the UNESCO links can help the city overcome its isolation from Wellington, as a political and cultural capital, by forging connections with like-minded people abroad.

‘I am part of a quite healthy network of South Island writers,’ he says. During an hour-long interview, he names poets Brian Turner, Rhian Gallagher, Emma Neale, Richard Reeve and Sue Wootton. ‘That’s important to me personally because, like a number of South Island writers, I note that we don’t do terribly well in invitations to the North Island for anything. The same old reputable, honourable, decent and accomplished people get the invitations.’

I spoke to Howard in a café in Christchurch, where he is spending the second half of 2016 as Canterbury University’s Ursula Bethell writer-in-residence. He had recently returned from Prague, where he had a two-month City of Literature fellowship. They gave him an apartment, a stipend and a translator. He liked Prague and he liked the seriousness of Czech writing, its engagement with deep subjects like politics, sex and history. As a combative literary outsider, he connects to that European tradition more than he connects to ‘the minor key’ that New Zealand poetry is mostly played in.

‘The thing I found in Prague is a boredom with irony, a boredom with this received view of how you should respond to political, moral and ethical questions, a slight disbelief that as a writer you would waste your time talking about your trip down to the dairy unless through using the particular, you’re opening out into universal themes. All of this was something I was sympathetic to as a writer because I dislike this aspect of New Zealand poetry. The domestic lyric has had an absolute stranglehold during my lifetime.’

Could these links with Prague and Heidelberg and other UNESCO cities create a new seriousness in Dunedin, perhaps a new kind of New Zealand writing free of irony and the inconsequential? If seriousness and opposition is to break out anywhere, it will break out in Dunedin, where even the world famous songwriters have a ‘rueful bitterness’, as Howard puts it. It is a place where people hang on for years despite the gloom, the rough weather and the isolation. Philip Matthews is a senior reporter and feature writer with Fairfax Media in Christchurch. He is thinking of writing a book about earthquakes, films and Christchurch.