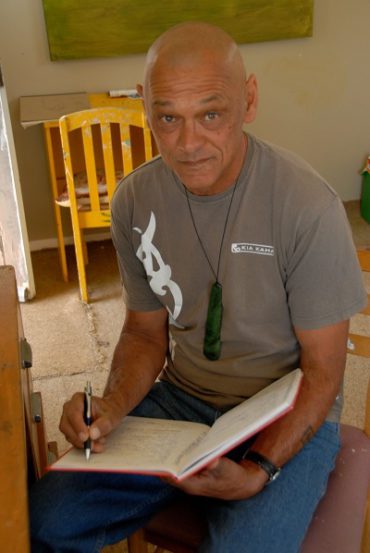 Apirana Taylor is from the Ngati Porou, Te Whanau a Apanui, and Ngati Ruanui tribes, and also Pakeha heritage. He is a prolific poet, playwright, novelist, short story writer, story teller, actor, painter, and musician. His poems and short stories are frequently studied in schools at NCEA and tertiary level. His poetry and prose has been published nationally and internationally and translated into several languages. He has also written for radio and television. Apirana’s latest book of poetry, The Breathing Tree, was published by Canterbury University Press in 2014. His second novel, Five Strings (Anahera Press, 2017), is a poignant and humorous love story about two people at the absolute bottom of the social heap. The NZ Herald states that in Five Strings Apirana ‘writes in an almost unique fusion of savage narrative threaded with incantations, song and poetry’.

Apirana has been Writer-in-Residence at Massey and Canterbury Universities, Rangi Ruru, St Andrews College and Hagley High School. He has been invited several times to India and Europe to read his poetry and tell his stories, and to national and international festivals, including in Medillen, Colombia. He travels to schools, libraries, tertiary institutions and prisons throughout New Zealand to read his poetry, tell his stories, and take creative writing workshops.

A quote written by Fiona Farrell on the back of Apirana Taylor’s poetry book A Canoe in Midstream (Canterbury UP, 2009) describes Apirana and his work:

Apirana Taylor is seer and shapeshifter, poet and warrior:

strength and love find equal balance in verse that is

alternatively raging and lyrical, dramatic and

The Breathing Tree (Canterbury UP, 2014)