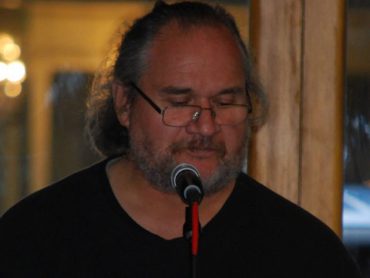 James George is a novelist and short story writer of Ngapuhi, English and Irish descent. He is author of Wooden Horses (Hazard Press, 2000), Hummingbird (Huia Publishers, 2003), and Ocean Roads (Huia, 2006) and Sleepwalkers Songs (Huia, 2016). Zeta Orionis (an excerpt from Hummingbird) won the premiere award in the 2001 Maori Literature Awards, judged by Keri Hulme. His short fiction has appeared in anthologies such as: Second Violins, The Best of NZ Fiction (twice), and Get on the Waka – Best Recent Maori Fiction. Writing in the NZ Herald, Margie Thomson described Hummingbird as ‘demanding and ambitious … [and] above all incredibly moving’. Writing also in the NZ Herald of James George’s short story ‘Walking to Laetoli’ in The Best of NZ Fiction volume 1, reviewer Siobhan Harvey said: George’s stunning Walking to Laetoli lovingly explores the dysfunctions of father and son relationships. Like all of George’s offerings, it’s wonderful reading’.

Amongst his awards and prizes, his second novel Hummingbird was a finalist in the Montana New Zealand Book Awards (2004), and the Tasmania Pacific Fiction Prize (2005). Ocean Roads (Huia, 2006), appeared on the 2007 Commonwealth Writers’ Prize Shortlist as one of the Best Books in the South East Asia and South Pacific region and was shortlisted in the fiction category of the Montana New Zealand Book Awards 2007. James was also a recipient of the Buddle Findlay Sargeson Fellow in 2007.

James teaches creative writing at AUT in Auckland, on both the BA and MCW programmes. He is currently working on his fifth novel, Two Rivers.