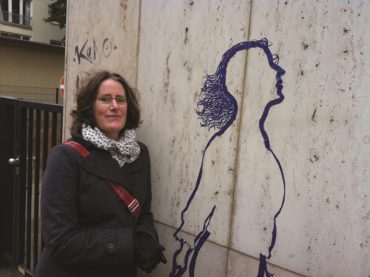 Kate Camp in Germany, 2016 (with thanks to Victoria UP)

Poet, reviewer and essayist, Kate Camp published her first collection of poetry, Unfamiliar Legends of the Stars (Victoria UP, 1998) to acclaim, winning the NZSA Jessie Mackay Award for Best First Book of Poetry at the 1999 Montana New Zealand Book Awards. She has proceeded to publish a further six collections, establishing her at the vanguard of New Zealand poetry. Her work is known for its wide-ranging and eclectic subject matter, its technical control and its musicality, with pop culture, high culture, the domestic confessional, close observation and found language featured as recurring elements. Her newest collection, How to Be Happy Though Human (Victoria UP, 2020) was Kate’s seventh book of poetry and published simultaneously in Canada and the United States by House of Anansi Press. Most recently Kate has published her short fiction memoir You Probably Think This Song is About You in which she shares experiences as diverse as bad relationships, misheard songs, the fallibility of memory and the wrong turns we take. Reviewer Catherine Chidgey comments that ‘Kate’s essays shine with wit, intelligence, and a humanity that is both intimate and universal.’

Kate’s work has been widely published, appearing in an array of New Zealand and international journals and magazines, including Landfall, NZ Listener, New Zealand Books, North & South, Sport, Takahē and Turbine. She has a regular slot on Radio NZ with Kim Hill reviewing classic literature, and has had poems selected for Best New Zealand Poems and The Best of the Best New Zealand Poems.

In her NZ Herald review of Snow White’s Coffin, Paula Green writes: ‘Camp strolls through the world in her poetry shoes, but it is not always physical travel. She draws upon books read, poems loved, paintings witnessed, as well as the sky and ground. These magical, knotty works react to a fragile world, and Camp navigates the light along with the dark. Terrific.’

Kate has been shortlisted and winner of many prestigious awards. In 2006 and 2004 Kate was shortlisted for the Glenn Schaeffer Prize in Modern Letters. In 2011, The Mirror of Simple Annihilated Souls won the New Zealand Post Book Award for Poetry. In the same year, she was awarded the Creative New Zealand Berlin Writers’ Residency. Her collection, Snow White’s Coffin, was written during her experience and was a finalist in 2013 New Zealand Post Book Awards. She was awarded the Katherine Mansfield Menton Fellowship in November 2016.

Kate was born, and lives, in Wellington.

Radio New Zealand interview discussing How to Be Happy Though Human (Aug, 2020) You Probably Think This Song is About You (memoir) 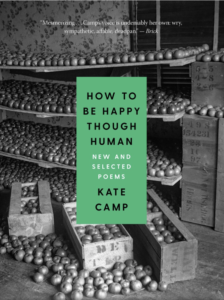 How to Be Happy Though Human (poetry)

The Mirror of Simple Annihilated Souls (Victoria UP, 2010)

Unfamiliar Legends of the Stars (Victoria UP, 1998)

You Probably Think This Song is About You (Te Herenga Waka University Press, 2022)