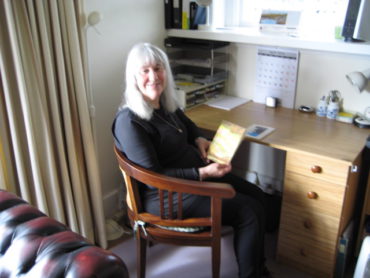 Wellington born Kerrin P Sharpe is a poet, writer and teacher of creative writing who now lives in Christchurch. To date she has four collections of poetry all by Victoria University Press: Three Days in a Wishing Well (2012), There’s a Medical Name for This (2014), Rabbit Rabbit (July 2016) and Louder (2018). Reviewers have notably described her work as, ‘poetry at its finest’ (London Grip), and a place ‘where nothing goes unnoticed’ (takahē). Bill Manhire wrote that ‘Kerrin P. Sharpe’s poems make me think of migratory birds. It’s as if they have just settled very briefly on the page after long journeys from far-off places’.

Although Kerrin completed Bill Manhire’s Victoria University Original Composition programme in 1976, family life was her focus until eight years ago. Since resuming writing, Kerrin has been published in many literary journals including: Best New Zealand Poems, The Best of Best New Zealand Poems (2011), Sport, NZ Listener, Trout and Turbine. In Australia, Cordite, Snorkel and Contrappasso; in Britain, London Grip and Blackbox Manifold and in the US, Penduline.

In 2008, Kerrin was awarded the NZ Post Creative Writing Teacher’s Award from the International Institute of Modern Letters, and in 2013 received a Creative NZ grant to write her third collection of poetry, Rabbit Rabbit. Also in 2013, she had twelve of her poems included in Oxford Poets 2013, published by Carcanet Press UK. In 2021 Kerrin was awarded a Micheal King Writers Centre residency.

Kerrin’s fourth collection of poetry, Louder, consists of poems she hopes will help give voice to people who are not often heard in our world.