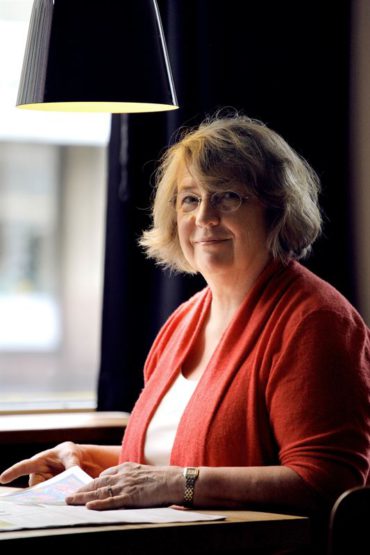 Fiction writer Linda Olsson was born in Stockholm, Sweden in 1948 and has lived in Kenya, Singapore, Britain, and Japan before settling in New Zealand. Her five novels have brought her international acclaim.

Initially, Linda graduated from the University of Stockholm with a degree in Law and worked in law and finance until she left Sweden in 1986. What was intended as a three years posting to Nairobi, Kenya, then became a meandering tour of the world until she remained in New Zealand with her family, completing a BA at Victoria University, and then a BAHon at the University of Auckland. She now divides her time between Auckland and Sweden.

In 2003, Linda won the prestigious Sunday Star Times Short Story competition. This was followed by her first novel Let me sing you gentle songs (2005). It subsequently became an international success, published in 25 countries, and winning bestselling paper book novel in Sweden in all categories. Her next three novels Sonata for Miriam (2009), The Kindness of Your Nature (2011), and The Blackbird Sings at Dusk (2016) have also been published internationally.

In collaboration with Thomas Sainsbury, and under the pseudonym Adam Sarafis, Linda has also published the first thriller in The Matakana Trilogy, Something is Rotten (2015). The Otago Daily Times has described it as ‘an engrossing read’ with ‘a darkest-hour-is-just-before-dawn twist at the end’.

Her fifth novel, A Sister in My House, was released in April 2016.

A Sister in My House ([Published in numerous countries], Penguin, 2016)

The Blackbird Sings at Dusk ([Published in numerous countries], Penguin, 2016)

Something is Rotten ([A political thriller co-written with Thomas Sainsbury, published in Australia, Sweden and Denmark], Penguin, 2015)

The Kindness of Your Nature ([Published in numerous countries, in US as The Memory of Love], Penguin, 2011)

Sonata for Miriam ([Published in numerous countries, in some as ‘The Consequence of Silence’], Penguin, 2009)

Let me sing you gentle songs ([in the US Astrid and Veronica, published in 25 countries], Penguin, 2003)