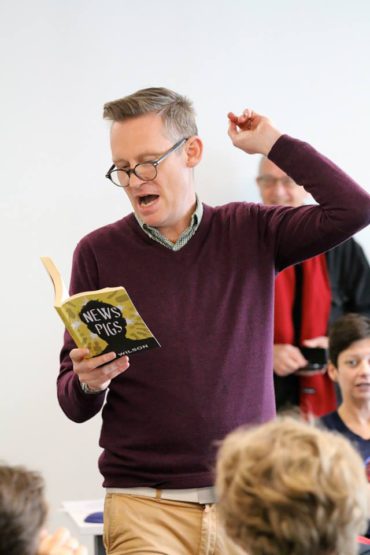 Tim Wilson is the author of a biographical work, two novels and a collection of short stories. He has worked as US correspondent for Television NZ and entertainment commentator for European network RTL. He has written for numerous periodicals such as the Guardian, Reader’s Digest and the NZ Herald, including haiku-like book reviews for the New York Times, and a longer piece for Newsweek.com that earned New Yorker writer Janet Malcolm’s opprobrium. Tim has appeared at festivals nationwide. He has neither sought, nor obtained, any fellowships, or residencies…though he has contemplated some. Writing, Tim believes, ‘can’t have true seriousness without humour’.

Tim’s first book, Good as Goldie (Hachette, 2002), transcribes the life and times of Karl Sim, the only man ever to profitably forge the paintings of CF Goldie. It became a runaway bestseller because every word was true, even the lies.

His first novel, Their Faces Were Shining (Victoria UP, 2010), tells of a US Mid-Western Christian woman who is neglected to be taken up when the rapture occurs. It was NZ Listener Top 100 Pick, a Canvas Book of the year, and finalist in the 2011 New Zealand Post Book Awards.

Tim’s collection of short stories, The Desolation Angel (Victoria UP, 2011), was well-reviewed, but most notably admired by international pop sensation Lorde on Twitter, kind of a high-wire moment.

News Pigs (Victoria UP, 2014), a novel based on his experiences as US correspondent for Television New Zealand, debuted at number three on the NZ bestseller charts. His sequel The Straight Banana is a comedy about a terror plot in New York. It’s a thriller, a mystery and a love-story, combined. There’s paranoia, addiction, ambition, TV, triumph, transvestitism, and Donald Trump. A book as slim as the earlobes trying on diamonds at Bergdorf Goodman, and as big as America herself, The Straight Banana un-peels itself to a shattering conclusion.

The Straight Banana was published in September 2016 (Victoria UP). Tim expects it will form part of a trilogy.

Mostly, Tim would like to publish a slim, carnivorous volume of verse.

Interview with Tim Wilson for the Tauranga Arts Festival (2014)

More on Tim Wilson at the Christchurch Writer’s Festival (2012)

Their Faces Were Shining (Victoria UP, 2010)