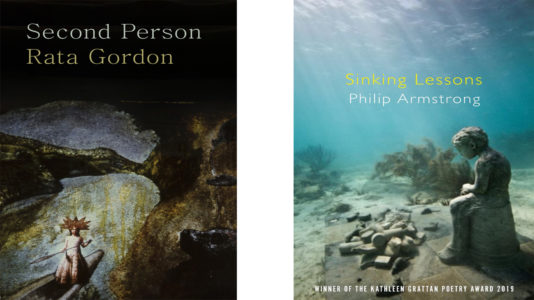 Two first collections both grapple ambitiously with big topics, identity and the strangeness of being. Each pursues its own map – the nature of these issues – but in distinct ways. As such, these debut poets declare themselves, their voice and vision, their influences and affiliations. In Sinking Lessons (winner of Otago University Press’s Kathleen Grattan Poetry Award for 2019) Philip Armstrong’s human/animal motif (among other things) simultaneously dismantles and asserts the nature of ‘us’. When his dog’s ‘fetch and whistle’ dreams nudge his own dreams into being in the night, the poet wonders, ‘I can’t imagine where it leaves my claims / to being human’ (‘Die Traumdeutung’). Rata Gordon’s Second Person likewise second guesses the entitlements we take for granted, but using collisions of states and substances: ‘It is not about coming home / or how calm and tender / is the meat of my heart’ (‘Not seagulls’). The respective book titles alone evoke clouds of association and unknowing, more than is on the label (what else can poetry do?). Sinking Lessons’ double-edged pun – ‘that sinking feeling’ in a time of rising sea levels – goes for gallows humour: laugh or you’d cry. And the ‘you’ in Second Person is ‘me’, isn’t it? Or ‘they’, or the reader second guessing, or all of the above. These days, it is perhaps impossible to view anything without a post-Covid gaze peering over our mask, but in a time when we can’t rely on much, these two new poets’ words, published in early 2020, seem eerily to be just what we were waiting for.

Philip Armstrong is a literature professor at Canterbury University with a focus on human-animal studies (he wrote a cultural history of sheep called Sheep), and while animals, beasts, creatures, fish and fowl – tautly examined Ted Hughes-style physically and emotionally – scamper through Sinking Lessons there is much more, a non-linear dive into the metaphysical unaccounted for. These 50-odd pages in four sections are busy with intent.

Armstrong signposts a childhood with small, thumbnail stories which articulate a watery, Pacific world view, and a world of questions. In ‘Sinker’, a ghoulish family fishing story, the boy’s freshly caught sprat has the hook reinserted by the father: ‘back in behind the eye and out the mouth / and drops the fish into the layered green’. Memories of the practical and emotional sit cheek by jowl; it’s not comfortable. In these poems, there’s the earthiness of Janet Newman, the delicacy of Dinah Hawken.

These are small narratives, and also metanarratives. The child’s emerging consciousness is joined by a growing cast of characters, both literary and legendary, with references from Marlowe to Melville, Shakespeare to Mary Shelley, Hemingway and Orpheus. The gorgeous ‘Swimming Lessons’ channels Moby Dick (quotation in italics):

Which makes me think about the time

four years old, no swimmer, and my eyes

opened the first time under water taking in’

The place where the Classical and contemporary inform each suggests Helen Rickerby’s How to Live. But these resemblances are just that; Armstrong is original in sound, idea, form.

Linguistically, these poems achieve that rare thing – economical yet conversational. Armstrong joshes about, code-switching with subtle entendre reflecting the collisions of character, place and time frame that are the meat of these poems. In ‘Call Sign’, the mundane opens up meaning: ‘the marine forecast… calling up tomorrow’, and, ‘dying in the afternoon’. In ‘Longitude’, coordinates highlight our banal attempts at locating ourselves: ‘That was east one seven five point eight’, but resound finally with, ‘I wake. It’s night. I hear the rain / like someone moving round the room’. Line breaks are as natural as breath.

Emblems and narrative threads twist and turn; nothing is wasted. In ‘A Visit to Hell’, it is noted that there are no animals, only ‘everybody who / believes in it: Hell is their Hall of Fame’. In the tender ‘Going to a Funeral’, the speaker travels with his father on a plane with their respective reading material, a kind of literary transaction, the father with his breviary, the poet with Doctor Faustus. The father ‘goes ahead’ as if into Hades. In the midpoint ‘Creature Effects’, a longish, sometimes-rhyming story about a headache, every line trembles with the mind-body equation: ‘Don’t go thinking’ and later, ‘The meltwater was thick as syrup where / I bathed my livid feet’.

And always, the question of boundaries of being, as in ‘Self Introduced’:

some kind of colt-legged greyhound-

Late in the collection comes ‘Song of the Orpheus’, a sequence about the ship of the same name that was wrecked in the Manukau Harbour in 1863, a rather strange flight of colonial history, tightly composed of five rhyming poems that hopefully signal another book.

Sinking Lessons has at its heart a humility about our place here on a physical level, alongside a deep questioning: did the poet/speaker (and you, reader) live this or just think it? Is it just a myth? Armstrong’s brilliant clashes of the small moment and the momentous keep the story alive.

The four sections of Rata Gordon’s Second Person constitute a grand tour of ‘you’ as mother/child, traveller, inhabitant of a body, inhabitant of the Earth. The tone, however, is the opposite of grand, as a deep engagement with image offsets any big ideas. The opening lines, ‘I’m dressed in yellow leaking / gorse seeds out my pockets like… (‘The pregnant pioneer looks over her shoulder’), sets up the persona who orienteers in a landscape of memories, images, ideas.

Like Armstrong, Gordon selects specific, defined childhood events – real or imagined, who knows, and does it matter? – to impart intense universal pictures of feeling. That’s the trick of poetry, where the unique reaches out to the reader. In ‘Small Town’, the lost aching moments of childhood seem to be finally captured by the poem – and by us: ‘dogs in pain / on freshly cut grass’ and ‘a bottle top has lost its mother’. Likewise, catastrophes are refound by the second-person/mother/child/you/me/reader: ‘A red streak / in our dog’s fur where / the neighbour shot her’.

Gordon’s linguistic modus operandi is sense-heavy streams, a smorgasbord of images and ideas in a kind of exuberant New York-school freefall.

Smear clay on the wall. Or cake mixture.

Pop coloured bubbles on the wall. Dip your whole body in

In like a Chinese fish and slap yourself against it. (‘Wall’)

Formally, there are a variety of shapes, from free verse to couplets to prose-y-type poem. But there seems to be a central organizing idea – that of the list, either overt lists (‘lists’!), or implied lists, that is, free verse in which assortments of ideas and things are juxtaposed. These arrangements are woven into the substance of the book. Bill Manhire writing on Walt Whitman’s lists in Doubtful Sounds observes that what this method achieves in a poem is to do away with ‘class’. The items in the list come ‘one after the other, each equally there, each with equal rights in the poem’. This equality is at play in Second Person. The governing idea of equality means entities – cake mixture, hearts, bodies, desires, laments – are allotted their fair share.

But what is the effect of this democracy of ideas? It seems that situating the ordinary or banal or absurd next to the heightened throws the latter into deeply emotional relief:

So flies will spell your name on the window

So you’ll never have to wear a concrete dressing gown

And so, in the end, the comparisons do poetic work to make us feel.

The travel poems section (India, San Francisco), which might at first seem like a detour from the business of this book, in fact develops the notion of the ‘second person’, much as travel broadens the mind:

You walk through the streets

in second person as if

watching yourself from behind

your backpack and your hands

are limp but your heart is

Thus, the ‘person’ is poised to enter the impactful and complex third section of the book, which is where things really take off. It is here that the self wrestles with, among other things, an unromantic settlerdom (a kind of inverse The Piano) in the knock-out poem, ‘How I arrived’:

the bodice was made of used handkerchiefs and the lasting

impression was of a Victorian housewife washed up on the beach

nibbled and scratched and worn away by sand-hoppers and limpets

sanitary pads soaked with the blood of seals…

And gender identity in ‘Pacing’: ‘It so happens I am sick of being a woman’. This poem mirrors Armstrong’s ‘The Female Me’, with both reminiscent of Steph Burt’s Advice from the Light, poems that imagine growing up as a different gender. Gordon’s challenge of the binary is aching but funny: ‘Still, it would be wonderful / to frighten a barrister with a possum tail’.

One lovely image system to notice about this book is its ‘yellow’, from the yellow dress of the first line to a bee to the sun on wallpaper (which perhaps refers to ‘The Yellow Wallpaper’) to a yellow flower to a mango to eggs to grapefruit to a yellow plate to turmeric, all of which denote an offset kind of happiness.

Lastly, we return to the mother of the second-person equation, and to an imagist clarion cry which is the essence of this delightful book: ‘skin to skin / eye to eye / on Monday / on the red towel’ (‘Shoreline’).

Each of these poets – whose books have been beautifully produced by university presses – uses the precision of craft to express what is normally just beyond our reach, the subtle, vital concepts of simply being here. 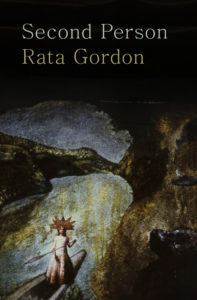 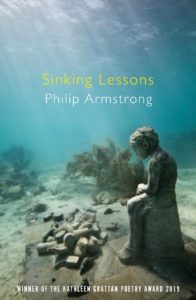 Anne Kennedy is a poet, fiction writer, screenplay editor and teacher of creative writing. Her latest book is  Moth Hour (AUP), shortlisted in the 2020 Ockham Book Awards. The Ice Shelf (VUP), a novel, appeared in 2018. Awards and residencies include the NZ Post Book Award for Poetry, the Montana Book Award for Poetry, the University of Iowa International Writers’ Program, and the IIML Writers’ Residency. She lives in Auckland.