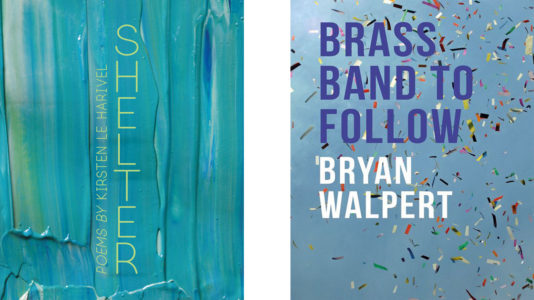 Kirsten Le Harivel’s Shelter is a debut collection of poems in both prose and verse that pay devoted attention to the places — Glasgow, Oakautere, Ahmedabad, Wellington — and the people, both mildly acquainted and beloved, beginning in a speaker’s migratory childhood and following her through a roving adulthood.

Le Harivel proves herself throughout this collection as a quiet master of the prose poem. I was surprised, spurred on, by the first of them, titled ‘From one migrant to another’. It is built of condensed, assonant sentences that cling to and push away from one another: ‘You must see the gleam. We have heat. We have flowers. Let us make our merit.’ I was delighted to discover, as I read on, that Shelter is nearly halfway made up of these prose pieces. Each offers much to indulge in. ‘Returning to India for a wedding’ wields the logic of the sentence to increase the surprise of a fresh observation: ‘I knew where I was headed, but not if we were on the right road.’ And ‘Flashpoint’ betrays the speaker’s shifting dialect alongside her resistance to it; when describing a corner store in Scotland, she says: ‘I call it a dairy because I have lived here too long.’

Some of Shelter’s shorter poems lack the turbulence and depth of the collection’s more substantial pieces, and, in my first encounters with them, had the tendency to leave me feeling not quite full. They read as lists of description, often visually vivid while rhythmically slack. But, though they sometimes lack intensity as stand-alone pieces, they offer something vital to the journey of the collection. Le Harivel uses these briefer moments, micro-catalogues of the natural world, to bolster the broader chapters of the life, the locations attended to, in Shelter. And certainly, what these briefer pieces do record is freshly observed and excitingly verbed: ‘he dresses her in suds’ in ‘A daily task’; and in ‘Prey’, ‘She stands at the edge of the water, darkening her jeans.’

When Le Harivel’s rhythm is driven by syntax instead of line break, there’s a generosity of both observation and reflection, and it’s where I so often felt the magic of the poetry working best. These pieces are patient but not stilted, and turn Shelter into more than a clean window onto several beautiful, separate scenes. Poet Li-Young Lee is often quoted as saying, ‘Syntax is identity’, and this is demonstrated in Le Harivel’s work, wedding detail with the movement of a mind, making some sense of what it means to be both home and away from home at once. And, in rare moments like ‘You are an elegant thing’, the heart of the speaker bursts through in blocks of unpunctuated text that marry the poet’s micro-cataloguing approach with an unrelenting urgency:
.

an elongated calf muscle an oyster in its shell a slice of sashimi a mouse sleeping in a
walnut a bed draped in a mosquito net a sheet of oxidized iron sunlight on dust motes a
cross-section of a whelk the oily sheen of a starling the cut in a kite-flying fight a house
tucked into its surroundings the curlicue of a letter the mouth-feel of amore dunes against
the fading light
.

Where Le Harivel’s work skews towards transparency, the poems that make up Bryan Walpert’s fourth collection, Brass Band to Follow, are relentlessly, bouncily self-aware. Walpert begins his first poem, ‘Begin with’, as he means to go on: chatty, breathless, bold as a trumpet solo:

something simple, something near,

not too near, it has to be distant

or you have to be distant enough from it

No, stay away from the moon.

It’s clear that Walpert is unafraid of repetition and circularity, of seeming to chase himself around in circles. There’s nothing concrete in ‘Begin with’ until we get to the moon, which is itself rejected in favour of a vegetable. But which vegetable? Possibilities — kohlrabi, lettuce, carrot — are tossed around, and the speaker doesn’t settle until quite near the end. Because, of course, the poem isn’t about any vegetable, but the deciding, the evening in which the deciding happens, the darkness, all of it folding in on itself as the poem, as claustrophobically as a kind of reconstructed sestina.

The burgeoning, single-stanza, long-line, syntactically playful poems that make up a great deal of the collection are so vital, so effervescent, that when I came to some of the poems made up of one- or two-word lines, broken irregularly but often by white space, they came off a little stingy, too preciously deliberate in contrast. I know this seems like a superficial reading, but it’s more than just how the poems look on the page. Walpert’s great strength in much of Brass Band to Follow is in rhythm, in how image meets attitude within the same stanza, and how sparks rise from that meeting. When asked to consider single transparent sentiments siloed in their own strophes (as in ‘Monkshood’: ‘So few words / between us today’), I felt I was being asked to accept a stillness I hadn’t been prepared for.

So many of these poems travel a confounding distance from first to last line. ‘Prompted’, a poem that proclaims its intention to include twelve particular words opens up to hold lines like, ‘This is the sort of poem where we imagine / how you’d read this if you still lived with me’. It’s a pleasure to imagine where the poem came from — probably one of those tried-and-true writing prompts — and to trace its growth into a stand-alone expression of loneliness, where the ‘You’ and the ‘I’ seize the power from the conceit of the prompt. This kind of transformation is most evident in the five-part series, ‘Experiments touching cold’, after a quote from seventeenth-century philosopher-scientist Robert Boyle. Many of the sections begin distantly, in the vernacular of thought experiments or tracts of scientific theory, but finish in the tenderness of the physical world, as in ‘Experiments touching bodies capable of freezing others’:

Which is to say,

in prosecution of this conjecture,

it is perhaps not unworthy

of an additional trial

of the application of some heat

should you be so disposed

to attend in full to this message

and call me back.

Walpert asks us to cross the wobbly bridge between icy academic pursuits in language and the concrete world, where each of us are only trying to reach each other in whatever way we can. The collection reaches backwards to call on poetic traditions, inwards to the poet-self, and always, crucially, outwards, not only to the people familiar to the poet, but to the ‘you’, the me, the reader, of whom Walpert is always aware. 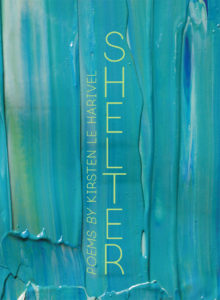 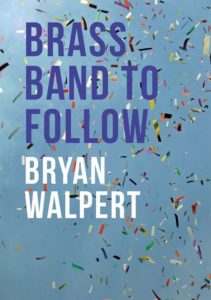 Sophie van Waardenberg is studying towards an MFA in poetry at Syracuse University in upstate New York, where she serves as co-editor-in-chief of  Salt Hill Journal. Her first chapbook-length collection of poems was published in AUP New Poets 5.