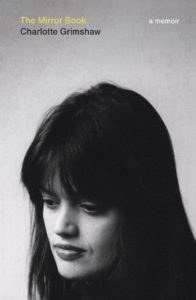 The Mirror Book: a memoir by Charlotte Grimshaw

The Mirror Book: a memoir
By Charlotte Grimshaw

A few years ago, at the Marlborough Book Festival, Charlotte Grimshaw and I appeared in a session called ‘Famous Daughters of Famous Fathers’. We were talking about being literary offspring — of C.K. Stead and Michael King, respectively. It was a genteel event, at Cloudy Bay, in a small room with glasses of bubbly, glimpses of golden grapevines from the window, those shining Marlborough hills. Steve Braunias was there. My mother, who lives in Blenheim and had come to my session the day before, wasn’t there, and I was glad. She and my father divorced in 1974, and I just wouldn’t have felt comfortable talking about him with her right there. Much easier to discuss people who aren’t in the room, who will never hear you.

We told amusing anecdotes, and laughed over the well-known rivalry between our fathers, which culminated in the dedication in one of dad’s books to Karl: For C.K. Stead, who, like execution, concentrates the mind. (Stead misquotes this in You Have A Lot to Lose, the second volume of his memoirs). But, as we said, despite the public feuds played out in the pages of Metro and the Listener — my father had accused Stead of trying to ‘ethnically cleanse’ New Zealand literature — they had a cautious fondness for each other. When he was undergoing cancer treatment, Dad received a kind note from Karl: Dad loved it, and brought it out to show people. This was a case of the public, documented relationship not quite showing the whole picture. They could have settled their disputes in private, but opted for the performative public showdown, playing to the gallery, or with one eye on their archives.

Steve Braunias asked me recently if I remembered Charlotte showing hostility towards her parents during that session. I didn’t, particularly: she seemed to have a sort of jocular affection and exasperation for her grumpy, intellectual father. So perhaps she repeated the mantra she had created and interrogates in The Mirror Book — ‘Lovely childhood, a house full of books’ — which she admits bringing out whenever asked.

But there was a moment during the event when a shadow crossed that golden light: it would make sense when, later, I read her 2018 novel Mazarine. The interviewer said at one point, ‘enough about your dads, what about your mums?’ I can’t remember what I answered — something about how my mum and stepfather raised me, so they probably had more influence on me than Dad. I noticed that Charlotte deflected the question. I don’t remember what she said, but I felt an air of discomfort in the room, a collective weight shifting in seats, and the subject was very quickly changed. Hello, I thought, something’s going on there.

That there was something rotten in the state of Stead became creepingly clear in Mazarine, which Grimshaw herself described as ‘selfie fiction’, where the boundaries between characters and author tend to blur. In the novel, a woman describes the iciness of her mother, the way she freezes her daughter out, the way the rest of the family denies the freezing. The protagonist consults a psychotherapist to get to the bottom of the ‘I and I and I’ of her different selves. As we learn in this memoir, the Stead family mantra is ‘It’s material. Go and make a story out of it’. Karl Stead has done this liberally, so why shouldn’t his daughter in her own fiction?

Then another step, the fictional veil getting thinner, was the 2019 publication of ‘The Black Monk’, a short story in which the protagonist, a writer, is hurt when her author father takes aspects of her life (the tattoos she and her daughter share) and uses them tastelessly. The narrator debates whether or not to publish a thinly disguised short fiction about the incident.

The story caused quite a stir. The day it was published a senior New Zealand writer said something to me to the effect of, ‘Why wouldn’t she wait until he had died before publishing something so incendiary?’ Here was a daughter, so fed up with the father using her family for material, that she decides to do the same.

And now, The Mirror Book. Taken together as one unit, the three pieces of writing — novel, short story and now memoir — are a fascinating project, an examination of the very notion of autobiography: of fact, of fiction, and of truth. The clues left in Mazarine and ‘The Black Monk’, are here laid bare, interrogated to within an inch of their life. All the scaffolding of fiction, with its comforts of deniability (‘oh no, it’s fiction’) fall away.

The inciting incident in the book is Grimshaw’s husband leaving her for another woman. She realises she is alone, that she has no women friends and that her parents are unsatisfactory confidantes. ‘I was outside myself, stuck at a distance while some other, the wronged wife, went about the business of reacting.’ This leads to an examination of her life, of past trauma, engaging with a (female) psychologist in a deep dive into her past and her family dynamics.

The book takes as its central motifs family mantras, often the ones used to make Grimshaw question her memory, or at worst, her reality. They circle around and around the book, very much in the same way thoughts circle around an insomniac brain in the dead of night (at one point Grimshaw states: ‘Haven’t we all… failed to turn off our mind when it’s spinning on repeat?’).

There’s her own ‘Lovely childhood, a house full of books,’ and there are Karl Stead’s description of their family in You Have a Lot to Lose: ‘There was a minimum of piety among us, tears but not too many, shouting but not too much, some songs, some recitations from memory, and endless jokes.’ Shards of this description resurface again and again, as the interrogation into the family deepens. Grimshaw keeps returning to this quote and pulling it to pieces — not too many, not too much — and how Karl, and to an extent Kay, have used it as a shield against the reality of the family relationships.

The Mirror Book is a fascinating portrait of not only a family, but the writing process. How we magpie material (go and make a story out of it) and what we build from it — and at whose expense? And where the line between fact and fiction is drawn: ‘I’d been inventing and writing stories since I was a child. When I decided to try something different, to write a true account of my life, I ran into a wall of fiction.’

Much like the mother in Mazarine, Grimshaw’s mother does not come out well in the book. Her daughter tries to understand her, but is left with the conclusion that her mother simply doesn’t care for her — actively avoids her, even — despite the family telling her she is imagining things. In family photos Charlotte sees a literal space between her and Kay, her mother leaning away. She revisits childhood memories, looking for evidence, and finds a neglectful mother, who tries to frame traumatic events as triumphs to be celebrated or forgotten, not dwelt upon.

The writing in this memoir is astounding. In between the endless circling and questioning, there are set pieces of childhood incidents which are vividly rendered. (In at least two of them Charlotte and her siblings are in mortal danger.) I want to say that she would make a terrific writer for children and young adults with her sense of atmosphere and pacing, but then I’d also be guilty of minimising her trauma and turning it into nothing more than an adventure, urging her to treat it as material for fiction.

This is not a black-and-white book. Grimshaw is at once a loyal daughter, and a furious one. Karl Stead comes off as a gaslighting tyrant, who controls the narrative of the family story not only in his books, but also with one eye on his archives, through the emails he sends her, trying to curate the real story for posterity. But she also describes aspects of their relationship with great affection — the ‘endless jokes’, perhaps. Still, Grimshaw critiques his books and their endless parade of flawless women, looks coolly at his affairs, and his use of them for ‘material’. She takes exception at Stead ‘fictionalizing us to death… Air brushing, smoothing us over. Rendering us as unreal.’

Another mantra, often repeated, this time from the psychologist: ‘Telling your story is existentially important.’ The Mirror Book is not written for our entertainment and it is not written to shock or edify us, though it does all of these things. Grimshaw creates a portrait of her parents in order to try to understand them, to ‘tell the story of our family, at least to myself, in order to save myself. All my life Kay and Karl had been telling it, and now I didn’t think it was accurate.’ It’s a book that needed to be written, for the writer to reinstate her place in the world, her family, her self.

Grimshaw implies that there can’t be ‘two versions of the truth’, that the notion is positively Trumpian, but this reader disagrees. There are always different versions of events, depending on who is remembering them. It’s just that the version that gets written down is usually the one that becomes the truth. The power lies with who wields the pen. And in this case, there are now two pens.

Rachael King is programme co-director of WORD Christchurch. She is the author of two novels for adults, The Sound of Butterflies and Magpie Hall, and one for children, Red Rocks. She is currently working on another novel.