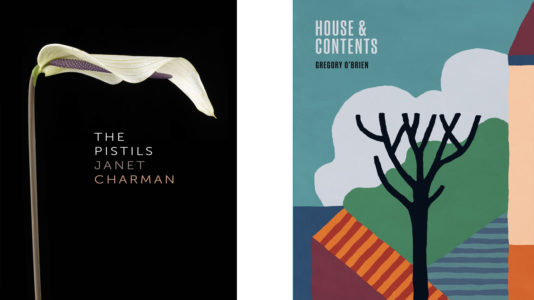 The Pistils
by Janet Charman

House and Contents
by Gregory O’Brien

Janet Charman’s ninth collection of poetry, The Pistils, is both harsh and soft, generous and sparse. In performance of the book’s title, the poems’ dynamics and tones dilate and contract, reacting innately to nightfall and sunlight. The female body exists here, fortified and violated, alongside ruminations on childhood, cereal, television and the digital world. It’s a collection of delicate balance and clear, unapologetic voice.

In the collection’s smaller poems, many of which appear early, Charman allows large and subtle transformations to occur. ‘Picnic Days’ begins in the casual, habitual care experienced in childhood:

from wherever we were

she would get us

and ends in the same scene, but with a new turbulence, a darkening light, a kind of terror:

there is the icy current

against our wriggling demurral

what we amount to

if we’re a doable swallow

The benign, warm communion of home-baked pies turns into the ominous communion with the waves. From this early poem onwards, water gets in everywhere, flooding so many of the following pages with the Wahine disaster, childhood afternoons spent drenched in the Waikato River, and the ocean between the speaker and a far-off friend reached via mobile phone.

There’s a minimalism to many of these poems that lets air and light and, yes, water in between the lines. But even with such brevity of line and ample punctuation of white space, there is a generosity of sound and colour. The poem ‘saying goodbye to the garden’ begins:

it caused me hassle

The hushed, bristling sound world created by the sibilance and assonance of Charman’s final words of each line — ‘daffodils’ and ‘hassle’, ‘purchase’ and ‘loose’ and ‘vase’ — textures this poem that seems, to the eye, sparse and thin. It’s a poem, like so many others in the collection, whose pleasure involves surprise: that the poem opens so widely to lines like ‘feel the sun / come down heavily on my skin’, and that these epiphanic moments don’t clunk in clumsily but feel, instead, just right within the poem’s gentle wave, is owed to Charman’s precision of craft.

To offset these more imagistic, clipped pieces are several looser and longer poems whose lines spill over the page and whose tone is a little less reverential, a little more laid-back. For instance, ‘the gold zipper’ and its three-line stanzas regulate phrases that otherwise burst out like soliloquies: ‘O shut up and lie down here in this bed for a change and listen’. The boldness of this poem is not only in these outbursts, but in its blatant repetition, each stanza appearing twice in almost the same order, but zipped up by the placement of the first stanza as the last. It, and several poems that precede and follow, pronounces a lyrical restlessness that is only satisfied by such luxurious enactment on the page, some stretching three or four pages, peppered with cold absolutes like ‘i never want to see them again’, referring to photographs, and blunt questions like ‘am i still missing out?’, referring to gender representation in literary journals.

It’s one thing for a collection of poems to feel conversational, but Charman brings this quality to our attention in poems like ‘when i was young’ by inviting in an italicised conversational partner, unnamed and seemingly imaginary:

there’s a bit of a beach

how far was it?

Instead of a kind of apology for poetry’s inherent intensity and self-seriousness, the conversational constructions within these poems remind us that the story itself — the memory, the fact — is not what we, or the poet, care about. The poem is made of the telling of the story: how and to whom. Will the reader believe the poet? Can the poet believe herself? These questions are some of the most exciting ones in poetry, and The Pistils is all the more dynamic in these moments of asking.

In The Pistils’ title poem, which comes near the book’s end, I’m satisfied by the knotting of so many of Charman’s poetic obsessions and image worlds. The ocean and the creek are here, garments of clothing, elements of flora, the female body and the fortified ‘body of my city’. The poem brings out all the more clearly the project of the collection and its title, a pistil being the female reproductive organ in a flower, something upright, receptive to pollen, both shielded and advertised by a flower’s garments of petals. It makes sense, then, to have poems like ‘cunt’ and ‘womb’ here, poems that both celebrate and guard the most symbolic, vulnerable, and exploited parts of a female body, and the brittle humour of the poem, ‘rhymes for clitoris’, begging attention for what is later named ‘the organ of exclusive eros’. We are let in for moments at a time to this clothed, open body, then ushered out, always aware of the distance between a body and its speaker, its speaker and the world.

Gregory O’Brien’s House and Contents, a hybrid collection of both painting and poetry, is arresting and refreshing both as a visual artefact and in its pace and structure. Over 20 paintings are interspersed through the written work, which includes both lineated verse and several pieces in prose. The paintings are unfailingly, ungarishly warm, and comprise myriad interconnected elements that encourage the eye to play across the page. That warmth isn’t lost in O’Brien’s written pieces, the order of which, the author writes in a brief note, ‘has less to do with their geographical referents and more to do with colour, tone, phrasing or maybe a faint thematic thread’. House and Contents is vibrant and immediately inviting. What’s inside, it says, is for indulging, and for you.

The collection’s title piece is one of the most conspicuously structural elements of the book. ‘House and contents’, the poem — is it a poem? — takes the form of a day-long log. At first it seems to be a straightforward earthquake diary detailing an aftershock after a 6.6 magnitude quake in Wellington, which transforms in later entries into a more associative chain of thoughts on the subjects of destruction, infrastructure, and the connections between Santiago de Chile, Christchurch, and Wellington in the wake of disaster. Fragments of the log crop up semi-regularly throughout the book, so as a reader navigates the plentiful places and people and questions of House and Contents, she also holds the smaller structure of a day in mind, from the first entry at 9 a.m. to the last at 5 p.m.

One of this collection’s foremost preoccupations is with the fragmentary nature of things. This artist seems to be asking himself almost constantly, ‘How do these pieces make a whole?’ The answer is partly in the care taken to craft those pieces, small as they may be. For instance, O’Brien writes in ‘On drinking water’:

of the sky nothing

Through the poet’s conspicuous enjambment, his short lines become not only fragments of the whole but whole things themselves. Unignorable, too, is the question of the poem, its fixation on ‘What besides’. What else is contained in one thing, even in water, which may seem only made of itself? Other poems in the collection more visually enact this predisposition to the fragmentary, such as ‘Sixteen things’ which is, of course, a poem of sixteen parts not easily held in equivalence to each other. One brief segment is titled ‘i.m. John Ashbery’, another, even briefer, has a title of 16 words (‘Sea kelp observed at Makara Beach, on the day of Samuel Beckett’s death, 22 December 1989’) to preface a poem of a single neologism: ‘murmurabilia’. Some are spaces for wordplay; others, lists of flowers.

What do we do with these fragments? Perhaps these poems do their real work when a reader decides how to put them together. One of the more self-contained pieces in the book, ‘House’, begins:

A man or woman

and goes on to detail each part of the body as a room of a family home. It’s dedicated to ‘Frank Jones, architect, and his wife, Pat’, and is one of the many pieces in the collection dedicated, or written in reference, to a specific person or place. The poem suggests we take the parts of ourselves that are separate and distinct, and look for ways to join them together. We can focus on one small part, and also on how that part, as in a house, is wired or nailed to another. The poem continues:

for the synchronicity of

or for its wiring – the brilliant circuitry

of a family, for it is the house

illuminates the tree outside

‘A dwelling’, O’Brien writes, ‘is scattered / but not divided’. Then, to follow the poem’s metaphor, so is a body as it is remembered. The poems in this collection seem, too, separate and stuck together: fragments in search of connection to people lost and living, the landscape, the past, the materials that make up the built world.

House and Contents does not only offer a way for visual art and poetry to converse with each other, the writing offering voice and occasion to the paintings, the paintings offering another layer of tone and colour to the poetry. It offers, too, a fresh method of interaction between a reader and the book they hold. O’Brien proposes we take all that is offered of these mosaiced paintings and poems, and discover for ourselves ways to fix them into wholes. 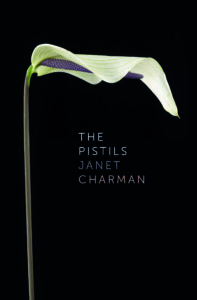 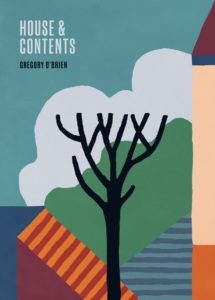 Sophie van Waardenberg is studying towards an MFA in poetry at Syracuse University in upstate New York, where she serves as co-editor-in-chief of Salt Hill Journal. Her first chapbook-length collection of poems was published in  AUP New Poets 5.