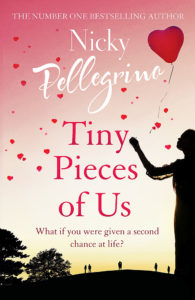 Tiny Pieces of Us by Nicky Pellegrino

Tiny Pieces of Us
by Nicky Pellegrino

When peaches are being squeezed by hand in the kitchen of an iconic Italian homestead with terraced gardens running down to a picturesque seaside coastline, you know you’re reading a Nicky Pellegrino novel. Tiny Pieces of Us is her twelfth novel, and a progression on her usual motifs: food, love, and pensive contemplation on decks with glass after glass of fantastic wine.

Elements of her previous work still figure in Tiny Pieces of Us. We return to Villa Rosa for a summer holiday in Pellegrino’s imaginary Italian village, Triento. Raffaella Moretti steps out of a previous book, Summer at the Villa Rosa, to make the customary sumptuous courses using locally sourced produce. However, before the long afternoons reclining on loungers, or the swimming in a naturally carved salt pool in the rocky shore, or the driving down a coast road slightly too fast with a gorgeous young cheesemaker, we spend the first half of the story in London with the novel’s main protagonist, Vivi.

Vivi was ‘born with a heart that couldn’t be trusted’. At nineteen, she is one of 165 young people in urgent need of a matching donor, when a catastrophic event occurs that ends one life, and miraculously saves another. Jamie McGraw is the boy who will soon give Vivi his heart. We meet him flying home on his bike to share the news with his mother, Grace, of his unexpected scholarship for summer school in robotics.

Jamie is a smart boy, athletic and optimistic. He wears all the safety gear his doting mother has insisted on, including the high-vis vest, but none of this can save him on tarmac greasy from rain and an oncoming car. I would have liked to linger longer with Jamie in the beginning – to be with him when he hands in the application for the scholarship, or to see his surprise when he receives it. But his promising future is cut short, as is our time with him.

Seven years on, Dan, Vivi’s ‘unsuitable’ lover and pushy boss at the Daily Post hatches a plan to use Jamie’s story: he wants to lobby government to change the law of organ donation to make it an automatic ‘Yes’ option, unless someone proactively opts out.

Tiny Pieces of Us is told mainly from Vivi’s first-person point-of-view, with other chapters in the third-person of Jamie and his mother Grace, as well as the recipients of Jamie’s kidney, lungs, corneas, and liver.  After reading Vivi’s story in the paper, Grace steps forward, although it’s against the rules to contact donor families or other transplant recipients. The pain and loss of letting her son go, to switch off the life-machine seven years earlier, is still raw. The decision she made to give away pieces of his body so others may go on breathing each day sits heavily.

Vivi wants to prove – to herself and to Grace – that she is living a life worthy of Jamie’s heart: ‘I was the headline, and Jamie was the story’. She searches for the other recipients of his organs, and they begin forming what Vivi’s sister, Imogen, calls the ‘transplant family.’ Imogen doesn’t resent the closeness of the transplant siblings, though she does fret about the speed at which it occurs. Having spent her childhood watching out for Vivi, Imogen is a voice of caution, endlessly fussing and fearing for Vivi’s safety. This same sense of anxiety extends into Imogen’s own home after the birth of her children. She can now ‘only ever sleep if she has a plan. Pyjamas she could quickly throw a jacket over, sneakers within reach, car keys by the door. Imogen is ready, although she is not sure what for.’

Vivi’s job as a tabloid journalist is uninspiring. Dan keeps her busy interviewing reality TV stars even though she would rather be working on ‘newsier, investigative pieces.’ She rents a dingy crash-pad in a bay-fronted villa in Highbury with ‘barely enough space for a large single bed and a clothes rack’ – although she could choose to accept some of the millions her mother and father are in the ‘Gooding’ process of giving away.

They spend evenings drinking at the Prince of Wales pub, though Vivi knows she shouldn’t be risking her health this way. The fear of heart-failure never leaves: ‘Fear wakes and stalks you in the night, when you touch your chest and feel where they cracked it open to pull out your old sick heart, when you count up the borrowed time and wonder how much more of it lies ahead, when your new heart thumps harder at the thought of it.’  ‘No one is ever safe’, says Stefano, Jamie’s cornea recipient. ‘That’s why it’s important to make the most of life.’

So, in typical Pellegrino style, her characters escape into an Italian idyll, hoping to be healed and entertained. The descriptions of place and food are detailed and vivid, as we would expect from the author.  Although the novel has a more serious theme than some of her other books, Tiny Pieces of Us remains hopeful and warm-hearted, offering insights into the process of organ donation that continues well beyond the miracle of the transplant.

The novel includes ‘news articles’ as Vivi’s law gathers momentum to become a social movement to promote organ donation. This is a complicated topic to portray, and Pellegrino deals with the subject with sensitivity and thoughtfulness. Sadly, we are not given a resolution to the results or ongoing success of Vivi’s Law campaign. (In my parallel imaginary universe, I have Vivi picking taking back the ownership of this campaign from pushy Dan, to find fulfilment in the form of her own ‘Gooding’.)  Some moments in the novel would have benefitted from a little more action rather than character contemplation.

Pellegrino’s books consistently haunt New Zealand’s top ten sales list for good reason: they have a big heart, and like many readers I enjoy being whisked away to her Italy, especially in these uncertain times of Coronavirus restrictions and fears. To Tiny Pieces of Us, I raise my glass of chilled prosecco and say Hai fatto un bel lavoro.

Rosetta Allan is the author of two bestselling historical novels, Purgatory and The Unreliable People. She lives in Auckland.