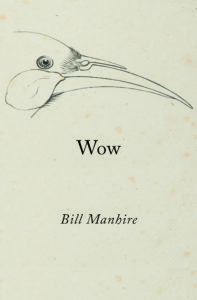 This is a collection full of birds and full of song. It opens with a ballad telling the story of the huia – ‘I was the first of birds to sing / I sang to signal rain / the one I loved was singing / and singing once again’ – and the last section of the collection ends with a poem almost in prose, ‘After Surgery,’ in which ‘A small bird flies out of the body, out of a blink perhaps, / maybe out of the lungs.’ This poem is followed by the final poem in the collection, ‘Little Prayers (15 March 2019)’, which is both a lament and a hymn, and a kind of a round, in which the closing line is also the opening line. A boy and girl sing, terribly, in another poem in the collection; in another, a robot, who also has a narrative function, makes music from deep within its machinery (and poetry out of typos); omens and similes sing together in another.

Bill Manhire’s poetry is always lyrical whether the lyricism is the lyricism of the ballad or the lyricism he finds in ordinary, unmetred New Zealand conversational speech. Sometimes it seems as if you can hear a poem tuning up, finding its rhythm before it turns itself into song. As it lifts into song, it lifts, too, into meaning.

For example, from ‘Isolation Notes,’ this perfect fragment, which I first encountered on Twitter:

Hospitals and schools, beds and desks

The rhythms are unconventional but moving – the two institutions, the two representation objects, hospitals and schools, beds and desks, paired as two phrases that both bookend their unstressed syllables with stresses; the repeated stress at the beginning of the following two lines, all that courage, all those corridors, leading into the silence of no more needing to be said. In contrast, the more conventional ballad rhythms of ‘Huia’ that are so confidently established are not quite sustained: the alternation of four stressed lines with three stressed lines begins to fall away; an expected rhyme gives way to the not-even-half-rhyme of frost and love. Throughout the collection, the poetry shifts from conventional, usually iambic rhythms, to the no less lyrical rhythms of conversational speech, sometimes setting up a kind of syncopation where one is heard against the other, sometimes moving from one to the other as a bird might move from branch to branch, or between branch and sky.

The wonderfully anti-epic ‘Noah’ follows this sort of movement from prose rhythms to poetry and back to prose again.  Here is the whole poem:

I abandoned the bad band

and joined the good band: I thought

that we would flood the world with music.

The first rains came and soon the trees

were somehow growing out of water –

we travelled through the forests

Eventually we built our boat,

the famous one with windows and the deck

of many roofs. Things that once were mountains

sailed on by, and then the whole of the world

had gone, and everything was sky. And yes

I brought instruments aboard – too late for some,

it’s true. As for the animals, I never really knew.

Someone else did that. In the end we ate a few.

It is a beautifully unexpected piece of revisionism to have Noah not at all interested in saving the animals, but concerned only to bring aboard his instruments. I love the idea, too, of the instruments he was too late for, gone the way of the unicorn. But music has been instrumental in moving the story along right from the moment when Noah abandons the bad band for the good band, and the prose rhythms shift into the iambic rhythms of poetry. How else to explain the early days, before the ark was built, of travelling by canoe? It is hard not to suppose that the canoe preceded the ark simply because it sounded so good. The poem floats along, from rhythmic phrase to rhythmic phrase, until the last lines ground the poem again in the prose rhythms of the typical Manhire speaker. Noah begins to sound, here, very much like the ‘Supposed Person’ Manhire confesses to trying to kill off, the voice he writes so many of his poems in: a ‘loosely composite person,’ male, New Zealander, maybe once a jockey, maybe a retired farmer, ‘determinedly laconic, opinionated, alive in the vernacular.’  (‘Supposed Persons,’ The Carcanet Blog.) Of course they ate the animals. It was the practical thing to do. And it rhymes.

The most substantial poem in the collection is ‘Warm Ocean’, a poem which begins with what looks like a typo: ‘Someone says lonely let’s go for a stroll.’  This voice is joined by another someone and another, all uttering platitudes – ‘someone says it was never about the money’ – more or less out of context, or with the only context being this stroll that everyone, now ‘we,’ go on together. The stroll takes in a landscape made up of cliffs and ocean, a long stretch of wood, a stream-bed; birds, of course, and books; time, in the form of a past ‘before the vows and boasts / before the oars demanding water’ and in terms of the noise of the world, the stones that go ‘clock cluck clock’; and by the end of the poem, which also seems to be the end of the world, we are left with small fires, shipwrecks, and (unsurprising only because this is a Bill Manhire poem) an orchestra ‘breaking up the ballroom.’

It is a landscape that is a recognisably Manhire landscape, made up of snatches of lyricism, repeated phrases, phrases that rhyme, phrases that have a rhythm to them, ‘yes all of that and more / all of that and more,’ and that is made up, too, of elemental things, snow, frost, the ocean, that even when they are brought alive by a detail – ‘sand that shuffles aside when she whispers’ – could have been lifted out of another poem, as if they are echoes, made up of language, as much as they are objects, ‘something sighing / like the troubled echo of a sigh.’  But this sense that this is a world made up of language takes nothing away from its transcendence; rather, it lends to the world we live in this sense of lyric significance. We hear in the words around us – words like ‘wow’ and ‘wherewithal’ – their loveliness and lyricism, their potential for beauty. When a telephone or cigarettes are introduced into the poem, we recognise them, too, as belonging both to our world and the world of poetry. Things have the significance of things in dreams, or cinema.

This has been a year of epic poetry, with Emily Wilson’s brilliant new translation of the Odyssey and Maria Dahvana Headley’s equally celebrated Beowulf. The lyric might seem the opposite of the epic, with its lonely interiority, but when a Manhire poem takes flight, and when loneliness is taken for a stroll, the epic vision that the lyric can also, he shows, give rise to is all the more resonant and all the larger for being distilled into song.